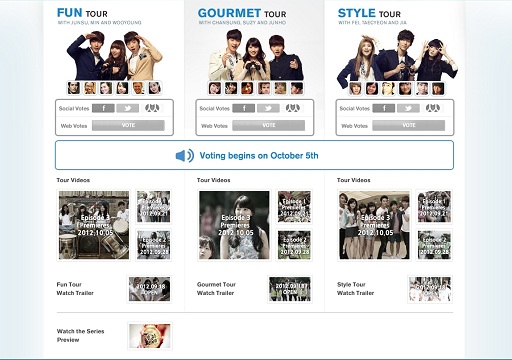 Earlier this year, the Korea Tourism Organization (KTO) partnered up with its honorary ambassadors, 2PM and miss A, to hold a video contest. In June, fifteen lucky winners were flown into Korea to spend seven all-expense paid days enjoying everything Korea has to offer. They also got a chance to hang out with the members of 2PM and miss A. The Touch Korea Tour was a campaign hosted by the KTO with the goal of inviting K-Pop fans to experience Korea while unlocking the hidden treasures and cultures of Korea.

Winners were split into three teams by theme to experience various cultures while visiting various tourist attractions throughout the country. The Fun Tour explored various activities Koreans do for fun, while the Gourmet Tour tasted and made Korean cuisines. The Style Tour visited Seoul’s trendiest and hottest fashion streets.

The Fun Tour, comprised of five lucky fans from France, the U.S., Australia, Indonesia, and Malaysia, spent the day with Junsu, Wooyoung, and Min riding a water taxi on the Han River. They also learned how to play Korean traditional percussion quartet, Samulnori. The team was then divided into two groups: the True Blue with Junsu and Wooyoung and the Power Red with Min. Each team learned the various traditional instruments – kkwaenggwari, janggu, buk, and jing – to put on a full Samulnori performance. Junsu, Wooyoung, and Min all tried the janggu and made numerous mistakes during their practice but managed to put on a successful show in the end.

Five fans from Japan, Singapore, and the United States participated in the Gourmet Tour with Junho, Chansung, and Suzy. This group was also divided into three teams to compete in a cooking showdown, where they made their favorite Korean cuisine. Suzy’s team had trouble keeping the Korean rice cakes from lumping, but they were able to make a delicious dish of the Royal Tteokbokki. During the cook-off, Suzy gave tips to her team members and spoon-fed her team members, creating long lasting memories for both herself and the fans. Junho’s team showed great teamwork, assigning roles to each member and coordinating each other’s roles to create a perfect Japchae. Chansung’s teams got to a rocky start, spilling their dish, the Haemul Pajeon. However, they managed to get everything under control and put out a great dish.

The Style team, formed of five fans from China, Taiwan, Hong Kong, and Singapore, posed in a photoshoot with Taecyeon, Jia, and Fei, wearing what they consider “hallyu style.” They enjoyed the trendy streets of Chungdam-dong and Garosu-gil, as well as other boutiques and malls in Hongdae.

Videos of each tour will be unveiled starting September 21 (KST) on Touch Korea Tour’s website (http://www.ibuzzkorea.com/touchkoreatour/eng/tour_fun.html). For ten days, between October 5 to October 15 (KST) , fans will be able to vote for the team that they believed best experienced Korea. The team with the most votes will be brought back to Korea to attend the awards ceremony with 2PM and miss A at the end of October. They will also receive other great benefits! The winning team will be announced on KTO’s interactive site on October 23 (KST).