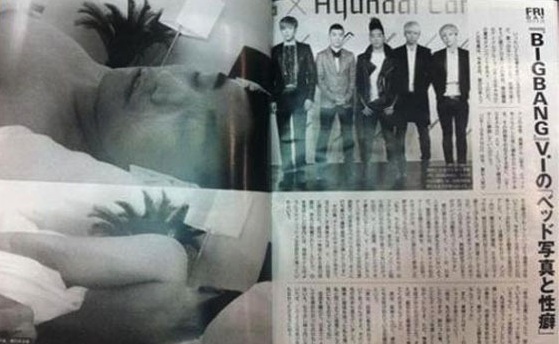 Some of the Big Bang fans are arguing the half-naked photos of Seungri in bed leaked yesterday by Japanese media Friday was in fact photoshopped.

The fans are questioning the validity of the photos based on the awkward position of Seungri’s face and neck, as well as the varying skin complexion in the photo. They also found a photo of a man that looks strikingly similar to Seungri, arguing the Japanese magazine actually tweaked the photo a bit to create yesterday’s Seungri photos.

Of course, there’s no proof that verifies these claims. But Big Bang fans seem to put more trust on Seungri as they said, “Of course we knew they were fabricated,” “Friday is known for being a gossip magazine,” and “Seungri’s still our innocent maknae.”

But most of the netizens still seem to believe Friday’s photos to be true, especially since YG Entertainment still hasn’t come out in public to address the issue. Netizens commented, “Friday’s a tabloid, but they don’t make things up,” “Fan girls being fan girls,” and “Wake up girl!”

Big Bang
Seungri
KPLG
How does this article make you feel?