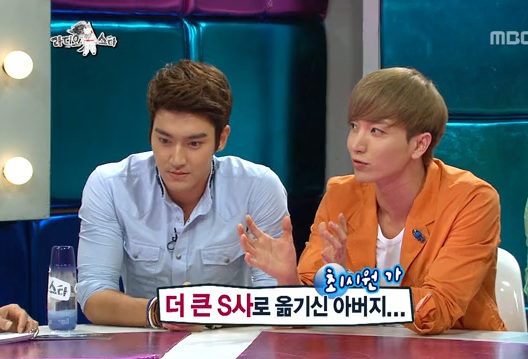 Leeteuk shared a photo of his fellow Super Junior member Siwon drunk at a bar. On September 14, Leeteuk wrote on his Twitter, “Everyone went aborad~only Siwon and Leeteuk are left in Korea. We’re having some beer together~I got coke. Siwon is drunk but he still looks like this..he’s sleeping. We met at midnight but he put on a full setting from head to toe. I’ll call you David, no, Si-vid. Haha.”

In the revealed photo, Siwon is seen falling asleep with his face leaning against his palm. With the dark lighting, Siwon does indeed look like the David sculpture. Fans in particular have been impressed by the fashion sense of Siwon, who’s in a fancy dress shirt even for a casual drinking session with his friend Leeteuk.

Netizens commented, “This is just unfair,” “God-given,” and “Are you sure there were no girls?”

Super Junior
Leeteuk
Siwon
KPLG
How does this article make you feel?