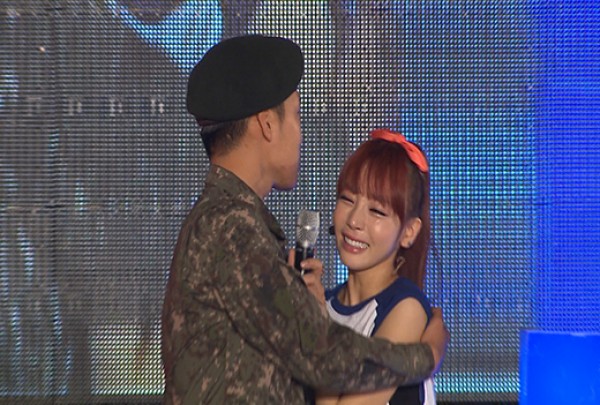 Recently for the filming of MBC “God of Victory,” Kara and Secret visited an air force base in Suwon to compete for the title of “The Most Popular Girl Group Among Soldiers.” While watching video messages from Kara and Secret’s friends and colleagues supporting and cheering for them, a video clip of Goo Hara‘s older brother started playing.

With the special video message, Goo Hara’s older brother appeared on stage and surprised everyone. When she spotted her brother, Goo Hara was speechless and could not hold back her tears. Previously on other variety shows, Goo Hara briefly talked about her brother in the army and visiting him at the base. She commented in tears, “It’s so good to see him, it has been a while since the last time I spent time with him. I love you, brother.”

Meanwhile, Kara and Secret went through seven rounds of competition, including dance battle, arm wrestling, and Korean traditional wrestling, to determine who deserves the title of “The Most Popular Girl Group Among Soldiers.” This episode of “God of Victory” will be airing on September 16 at 5pm KST.

Goo Hara
KARA
Secret
God of Victory
How does this article make you feel?