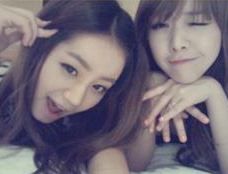 Girl’s Day’s Hyeri revealed an intimate photo she took with same group member Min Ah. On September 14, she wrote on her Twitter, “With Min Ah. Before going onstage in Jeju Island. I feel good for many reasons. I am thrilled. Everyone, let’s meet soon!!” Along with the tweet, she uploaded a picture.

In the photo, Hyeri and Min Ah are looking at the camera while lying on the bed on their stomachs. They seem real close. Their various silly expressions particularly catches people’s eyes. The cute charms shown in the snapshots, which is a characteristic of girl groups, most likely brings smiles to viewers.

Netizens who saw the picture commented, “It feels like my eyes have been purified,” “So cute that I want to bite them,” and “How can they be so cute?”