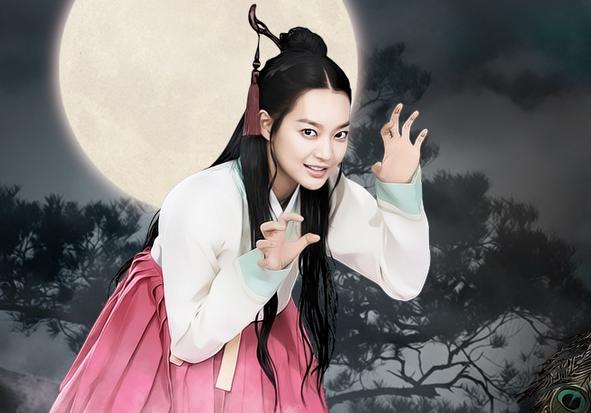 Shin Min Ah shows her charming self on the set of “Arang and the Magistrate.” Aside from endearing herself to viewers as the title role Arang, a ghost in search of the cause of her untimely and unjust death, Shin Min Ah has also won over fans’ hearts with recent photos of her taken behind-the-scenes.

The photos show the actress giving off a wide smile and looking beautiful in her hanbok. In one of shots, she is seen with a cooling herself with an ice bag on her head and a handheld, battery-operated fan.

Netizens who have seen the pictures commented, “Shin Min Ah’s smile is eye-catching,” “It seems like there’s a good atmosphere during filming,” “Shin Min Ah is a ghost who is more beautiful than flowers,” and such reactions.

According to a representative of the drama, “Shin Min Ah is very busy with the shooting, but her good-humored energy keeps everyone up through the overnight filming and creates a good atmosphere on set. It seems Shin Min Ah is playing an even bigger role with her distinctive bright smile than just being ‘Arang.’”

“Arang and the Magistrate” co-stars Lee Jun Ki and airs on MBC on Wednesday and Thursday evenings.

Shin Min Ah
Arang and the Magistrate
KPLG
How does this article make you feel?