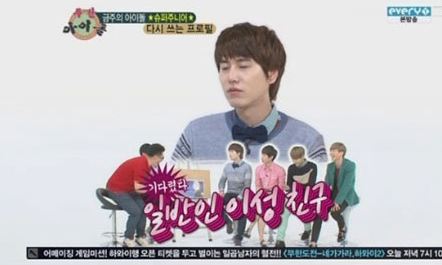 Leeteuk then responded: “I don’t do anything, but, just from my surroundings, there are so many women who tell me that they like me. Even celebrity women have contacted me telling me they were interested.” Super Juniors members had to admit and agree that Leeteuk is popular with the the ladies.

Upon the MCs asking why Leeteuk is so popular, Kyuhyun mimicked Leeteuk’s aegyo voice when he talked on the phone with women. Then Eunhyuk turned to Kyuhyun and made everyone laugh by asking: “Are you talking about yourself?”