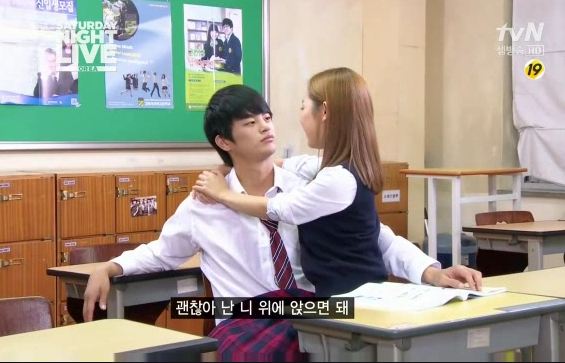 “First, anywhere, anytime, do not forget to have a vague look in your eyes.” In the first scenario, Yoon Jae is sitting in another girl’s seat. The girl tells him that he is in her seat. But, as soon as she gets a glimpse of the look in Yoon Jae’s eyes, she is mesmerized, and finds herself sitting in his lap telling him she doesn’t mind sitting in his lap. Yoon Jae turns to the camera, you saw that, right?

“Second, initiate subtle skinship.” In the second scenario, Yoon Jae sits down next to a girl eating lunch. The girl gets some sauce smeared on her cheek and, in a signature move from the drama, Yoon Jae licks his thumb seductively and wipes the sauce off her cheek and then licks his thumb clean. The girl looks like she is about to make out with Yoon Jae any second now and she asks, should we mix our amylase (enzyme in saliva) together? Yoon Jae turns to the camera, it’s easy, right?

“Third, [act] as if you are indifferent to the girl, chicly take care of the girl.” In the third scenario, a girl is complaining about her stomach hurting when Yoon Jae pulls out a maxi pad, referencing a memorable scene in the drama, and gives it to her. She asks if it is the kind with wings and he flutters his hands yes. She asks him to marry her.

“Fourth, when you kiss, make sure you are soaking wet, without warning, approach her.” In the fourth scenario, Yoon Jae throws a glass of water on himself. He makes out with a nearby student. A teacher catches them and asks what’s going on. He again douses himself with water, approaches her, and says check, referencing a line from a kiss scene in the drama, and ends up making out with the teacher.

Watch the video, subbed by fans on Soompi.