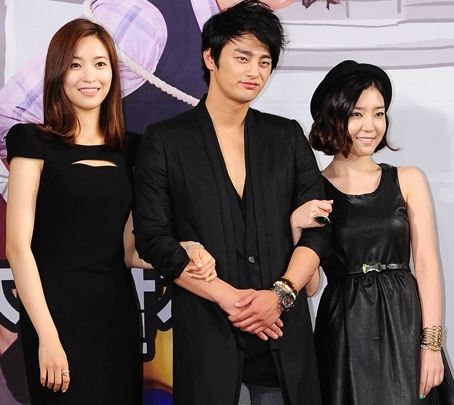 Seo In Gook answered: “If I speak honestly, I am still in the midst of matching my breath with [getting my chemistry right with] “Rascal Sons” actress Yoon Se In. I have not even done one shoot with Shin Da Eun. In the drama, Shin Da Eun and I still do not know each other. Actually, I don’t know. Even though it’s a good thing for me to have a noble and pure personality and be honest, since today I am at the press conference for “Rascal Sons,” should I not say that I like Yoon Se In the best?”

When pressed on whether Jung Eun Ji was actually his real answer, Seo In Gook said: “Of all things, today is actually the day that the last episode of “Answer Me 1997” is aired. It’s a very difficult question. How should I answer?”

Seo In Gook then said: “I like Sung Si Won. Still in my heart, it is Sung Si Won. The reason is that, for five months, I filmed with Sung Si Won….I really felt the extremely huge charm of Sung Si Won, not Jung Eun Ji, Sung Si Won.”

“Answer Me 1997” airs its final episode on September 18. To tide you over, check out Seo In Gook reprising his role as Yoon Yoon Jae in tvN program “Saturday Night Live Korea” sketch “How To Become Yoon Yoon Jae.”

“Rascal Sons” premieres its first episode on September 22. Check out the released posters for the drama.