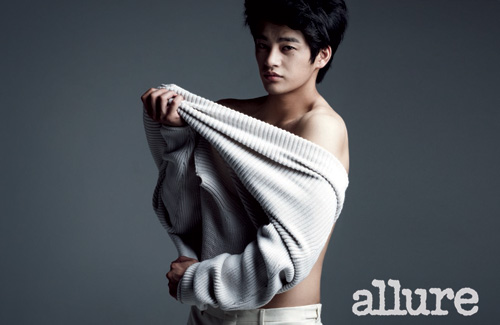 Singer-actor, Seo In Gook, has shown a different side of him for Allure magazine.

In this spread for the magazine, Seo In Gook reveals his mature image with clothing geared for the fall season.

In an interview for the magazine, he talks about his new-found popularity as an actor and his chemistry on screen for the drama “Answer Me, 1997.”

Seo, who plays the well-loved Yoon Yoon Jae, on tvN’s “Answer Me, 1997” is garnering a lot of praise and popularity for his role. He is also gaining attention for his natural on-screen chemistry with A Pink’s, Eun Ji who plays the spunky Sung Shi Won.

There have been various reports on his relationship with Eun Ji outside the set and Seo In Gook shared his thoughts on the issue.

“We played around as Yoon Jae and Shi Won even when we weren’t filming, using dialects and treating each other as our characters. My effort to be friendly to Eun Ji when we first started filming was because I knew just how important that ‘chemistry’ between the actors were.”

“As a viewer, if I don’t see that ‘chemistry,’ (between characters) I feel uneasy and unnatural, even after many embraces and loving stares. However, if I see that (chemistry) then even the smallest tension in their idle moments become throbs and tensions for me. I wanted to help the viewers see that in us. I think I succeeded, seeing our scandals and all.”

He also talked about his growing acting career. “Looking back, I really had an exciting life. It was exciting from the beginning. I did factory work, welding, serving jobs at bars, and really wandered around a lot for direction but I managed to make my debut as a singer in ‘Superstar K.’ Now I’ve become an actor, I met ‘Yoon Yoon Jae,’ and now I’ve had the opportunity to receive a lot of love from our viewers. I am really looking forward to what life will have in store for me.”

This issue of Allure featuring Seo In Guk’s spread will hit stores next month.

Seo In Gook’s drama, “Answer Me, 1997,” will air its last episode this week. His new drama, “Rascal Sons,” with Ryu Soo Young and Lee Sung Jae will begin broadcast this weekend on MBC.

Apink
Seo In Gook
Answer Me 1997
eun ji
Rascal Sons
How does this article make you feel?