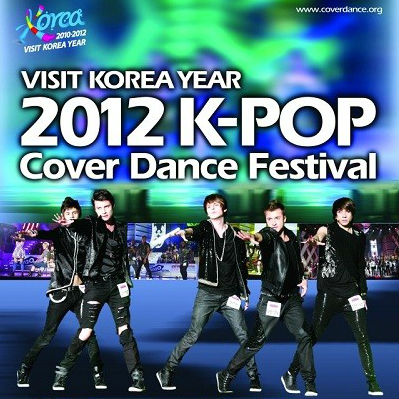 Hey folks in Korea, what are you doing this Friday? Join contestants from the 2012 K-Pop Cover Dance Festival, hosted by the Visit Korea Year campaign, as they perform a K-Pop flashmob featuring “Gangnam Style” and other hit songs! The flashmob will be held on Friday, September 21, 11:30 AM, at Gwanghwamun Square. Anyone can join (and we know you already know how to do the horse dance), so be there to watch or participate in the fun!

The flashmob kicks off a weekend of K-Pop goodness, as the final round of the 2012 K-Pop Cover Dance Festival will take place on Saturday, September 22 in Gyeongju. Last April, applicants submitted their performance videos to the event’s official website. A total of 80 final contestants in 13 teams have been selected from nearly 1,800 video entries from 70 countries. Wow! The local rounds winning teams come from 11 different countries: Nigeria, Russia, Hungary, Indonesia, Philippines, Brazil, India, Australia, Japan, Thailand, and the United States. Now that’s international!

During the final round, K-Pop groups Rainbow and A-JAX will judge the remaining contestants and select a winner. The final winner will have the opportunity to perform onstage at the Hallyu Dream Concert on Sunday, September 23 at Gyeongju Citizens’ Stadium. The concert’s lineup includes BEAST, INFINITE, 4minute, MBLAQ, SISTAR, Secret, KARA, T-ara, After School, B1A4, A Pink, RAINBOW, BOYFRIEND, Davichi, JIGGY DOGG, Ailee, U-KISS, NU’EST, Gangkiz, VIXX, FIX, BTOB, A-JAX, and EXID. In other words, you need to be there!

Good luck to all teams! Fighting!

KPOP Cover Dance Festival
Rainbow
A-JAX
How does this article make you feel?