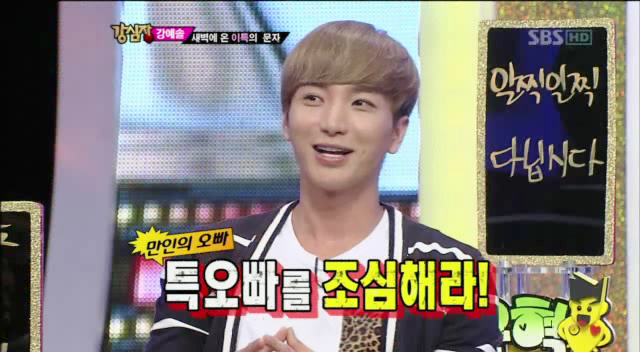 Leeteuk Responds to Criticism Regarding His Late Night Texts to Dasom

On September 19, Leeteuk wrote on his Twitter, “Celebrities live and die with their image. Whatever your real personality is, you can live as a good person, a cool person, and a nice person to the general public as long as you do a good job with ‘image making.’ But there’s limitation to that too. Time will only tell you the truth.”

He continued, “Why don’t you follow me just for a day? I’ll show you what my regular day is like. If you need my phone, I’ll give it to you. You’ll see what calls I get, or if I even receive any calls…”

The tweets were in response to the recent hate comments he received after the September 18 episode of SBS “Strong Heart.” On the show, actress Kang Ye Sol said, “Leeteuk always texts me whenever he gets a new cellphone. But a few days ago, he texted me although he didn’t get a new phone.” She also showed the message which arrived at around 3AM.

SISTAR’s Dasom, who also guested on the show, reportedly jumped in and said, “He also texts me around 3~4AM every day! It’s not just me but our whole group. Leeteuk is known as ‘everyone’s oppa’ among all girl groups.”