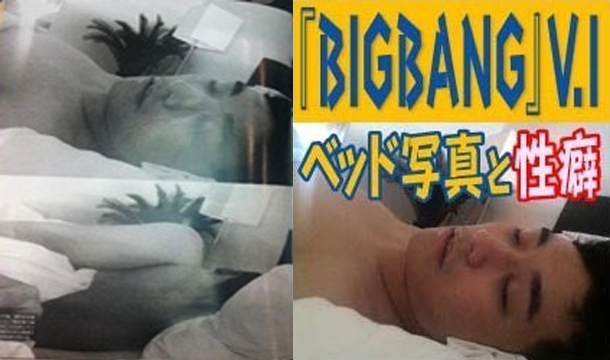 Big Bang’s Seungri saw himself involved in two of the worst controversies of his career over the last week, as photos of him half-naked in bed and a video of him kissing a Japanese model surfaced online.

Celebrities often find themselves engaged in controversies, especially the more popular they get. Every move and comment gets overly dissected by the fans and media, and more often than not, minor issues get blown out of proportion.

Big Bang has been no exception as their names have been involved in different types of controversies every year. From plagiarism scandals to wardrobe malfunctions, there has not been a year without drama.

Here are the top 7 Big Bang controversies over the years. Please let us know if we missed any!

(Flip through the list by clicking the arrow at the bottom right of the top image!)

Upon release of his 2009 solo debut track, “Heartbreaker,” G-Dragon was accused of plagiarizing U.S. rapper Flo Rida’s “Right Round.” YG Entertainment denied all allegations but the public seemed to have lost their trust in the agency. But right when the public was about to turn their back on YG and G-Dragon, Flo Rida made a feature in a remix version of “Heartbreaker” and the two performed together at a concert as well, quieting whatever criticism there were.

In 2007, T.O.P did a TV interview wearing a jacket that had patches designed after the Japanese War Flag. The flag that was used as the war flag of the Imperial Japanese Army is often associated with Japanese militarism, and many Asian countries, including Korea, see its use as offensive. YG Entertainment and Yang Hyun Suk quickly addressed the controversy and apologized for being insensitive to the issue.

Daesung ran over a motorcyclist in 2011, who was later pronounced dead. Although Daesung was ruled not guilty for the motorcyclist’s death, he took the whole year off to self-reflect on himself, He’s is fully back now, but his involvement in variety shows is nowhere close to where it was pre-accident.

In 2010, Taeyang showed up on “M! Countdown” wearing a shirt that said “Fu*k You” on the back. It was during his stage for “I’ll Be There,” the #1 song of the week. But after the broadcast, fans and the press criticized Taeyang for his “wardrobe malfunction,” especially since “M! Coutndown” has a lot of underage viewers.

T.O.P Goes on Stage with a Lollipop in His Mouth

In 2008, T.O.P was spotted holding a lollipop in his mouth while performing at Sung Shin Women’s University’s freshmen welcoming party. Although it wasn’t a serious problem, the press accused him of not showing his full effort on stage, and being disrespectful to the fans that came to see him.

G-Dragon was tested positive for smoking marijuana in 2010. But he later explained that he unknowingly took a single puff out of a joint that was handed to him while drunk in Japan. Believe it or not, G-Dragon said he thought it was a regular cigarette and no charges were pressed against him.

Just last week, photos of Seungri lying in bed were released by Japanese magazine Friday. The Japanese tabloid also included an interview by an unidentified Japanese woman, who told about Seungri’s “choking” habits in bed. Five days later, Seungri was involved in a dating rumor with Japanese model Anna Kubo, after Taiwanese press revealed photos of them kissing. YGE denied all allegations, but the controversy still remains a hot topic online.