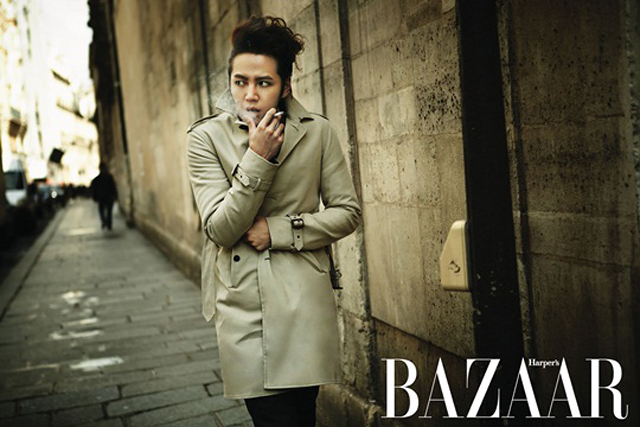 Jang Geun Suk had recently left for Paris for a “Bazaar” photo shoot. Jang Geun Suk posed in various locations that highlighted the foreign, Europe-esque feel. The pictorial comes with an interview and can be found in the October issue.

Jang Geun Suk models fashion brand Burberry and Tods in this pictorial. The various pieces such as the trench coat, blouson and jackets give Jang Geun Suk a classic as well as a casual style. Jang Geun Suk didn’t fail to impress with his detailed face expressions and gestures throughout the shoot.

The photo shoot was held in July and despite the foul weather, Jang Geun Suk was bright and energetic, according to new agencies. He was seen enjoying himself and even brightly greeting his fans in the area. Staff members were impressed with his level of professionalism.

In the interview, the many different sides of Jang Geun Suk were revealed. He said, “Negative words could hurt me but instead, I chose to let them build me up. Not everyone can like me. I’m not the ‘nation’s actor’ or the ‘nation’s little brother.’ The only bandage for the scars is to be even stronger.” He also said, “If I could take my entire savings in place of something, I’d chose time.”

Harper's Bazaar
Jang Geun Suk
KPLG
How does this article make you feel?