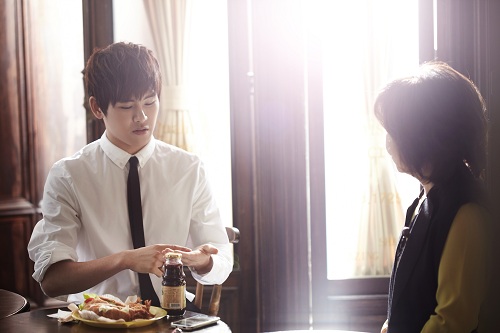 Hoya Speaks About Role in “Answer Me 1997” in Interview

In a recent interview, Infinite‘s Hoya sat down with columnist Jung Suk Hee and spoke about a variety of things related to the hit drama “Answer Me 1997” and his role as Kang Joon Hee.

Q: When I first saw your name in the casting list, I thought I was seeing things. This is the first time I’ve heard that you act. What was the process of your casting?

A: I found out that many idols who knew the Kyungsangdo dialect auditioned. I wasn’t the only one from my team who auditioned. I had no thoughts of acting in the future so I didn’t even expect to be called back. I did think it would be fun to act before I debuted but after I started things with Infinite, neither my company nor myself really thought about it. I really just auditioned because of one thing: the dialect. But I got accepted. I still don’t really know why the staff chose me. I didn’t even know what role I would be playing before I got the call a week later. I heard about my role later. I personally didn’t have any bias or prejudice against homosexuality so I wasn’t really pressured about that. But my company director was a bit concerned. People around me were worried that my image would be negatively affected. But I said that I really wanted to do it and asked multiple times that they allow me. I really wanted to play this role.

Q: Although there has been a lot of progression, homosexuality still has a few uncomfortable aspects in society. But strangely, many people had no feelings of rejection toward Joon Hee. What do you think the reason is?

A: Yes, many people say that. First, I think the staff created Kang Joon Hee to be innocent and likeable. Also our company director kept telling me that Joon Hee should keep his boundaries and not cross any lines. We spoke about many things during the drama shooting. I think the character was created with the help of many people. You know, I was in charge of the masculinity in our team. With a lot of charisma. But Joon Hee is detailed and gentle. So perhaps it was a nice combination of those two things? I think it was a nice balance of the two different sides, which is what the drama director wanted.

A: Myself and my company worry about that a lot. People who don’t really know Infinite may think that I’m just an affectionate and detailed person like Joon Hee. They might be surprised at my dark image on stage. But I can’t just be smiling like Joon Hee on stage. Being loveable is something that other members are in charge of in our team so I am worried (laughs).

Q: Since it’s your first time acting, did you have a role model?

A: I never really decided to try to act like someone. I just tried to portray Joon Hee the way he was described in the script. Thinking about it now, when I was up on stage and trying to be all charismatic, I think that was sort of acting. Dancing is acting as well.

Q: I bet fans are loving your unexpected publicity. But I also bet they were nervous for you in the beginning.

A: It’s not an exaggeration to say that I’ve come this far with the strength of our Infinite fans. I’m sure all idol groups are like this but I think our group’s fandom is especially warm. Our fans were better at promotions than our own company in the beginning, posting clips and pictures on Internet cafes and forums. I heard that my own fans are waiting for me to release a solo album. But I’m sure many fans were confused because I had no prior interest in acting. I know they were surprised and worried. I’ve never even learned it properly so it’s natural that they worry. I want to tell them, I’m always working hard so please don’t worry as much.

A: I’m a bit on the shy side and it was my first time doing something without my other members so I was very careful. Fortunately, I knew Seo In Guk hyung before so he introduced me to everyone and helped me out a lot. And other people weren’t so shy so they came up to me first and talked to me. I knew that since we were all close friends in the drama, I had to become close to them in real life as well. So I purposely tried to be more outgoing. In Eun Ji Won‘s case, he is a great senior to me. At first, it was a bit awkward but we got closer as the days went by. Eun Ji Won hyun opened his heart a lot. He really is very innocent just like his image is on television.

Q: I bet your goals have been altered?

A: I have a lot of ambition so I want to do many different things. For our 1st album, Mithra Jin from Epic High wrote the rap lyrics for us but after that, I wrote them myself. As I was rapping, I had a desire to sing too so I received vocal lessons but I didn’t have much talent there. So I just kept practicing. I was actually bad a dancing too. I’m where I am right now because of my efforts. I practiced dancing as if I was working out. I didn’t have any thoughts on acting too but after completing this project, I’m getting greedy again. I want to officially start studying acting. But I haven’t received any scripts yet (laughs).

Q: As you were filming “Answer Me 1997,” didn’t you reminisce about your school days? Don’t you miss your friends?

A: I dropped out of school but I do remember my colleagues from my trainee days. I was so close to them so I don’t regret dropping out. Those times were precious memories to me that no one else would have experienced. But one thing that I was really thankful toward this drama was the chance to wear a school uniform again and the experience of a school life. I said I didn’t regret it but I guess I still felt something missing inside of me.

A: In one word, a gift? It’s a miraculous thing that isn’t easy to explain. Because there were really so many things that I received. I met so many good people. Each day was so much fun that it wasn’t even hard although we stayed up all night filming. I didn’t really have a hobby before. People said my job is my hobby because I’d always be practicing in my practice room. But after I started acting, I knew I had to experience many things to become better. And I also like the fact that I gained so much more publicity (laughs).

Hoya
INFINITE
KPLG
Answer Me 1997
How does this article make you feel?