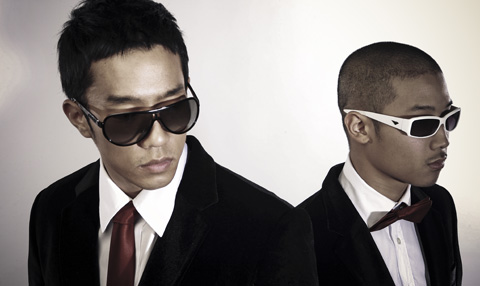 [Interview] Mighty Mouth’s Sangchu: “I Want To Place 1st On Music Programs Before Entering the Military”

Hiphop duo Mighty Mouth has released their newest mini-album “Navigation” on September 19 and have shared in the interview with OSEN that they’re aiming to place 1st on music programs.

Singer Lyn is featured in the title track “When It’s Like This,” a song where Mighty Mouse decided for the first time since their debut to have sad, dark lyrics. Throughout their career, they’ve put out trendy, bright and fun songs skillfully avoiding redundancy and making it their trademark. It’s been revealed that Sangchu will start his military service on October 30 so the mighty duo will not be able to work together for the time being. Thus, they want to earn 1st place on the music programs showing real music.

Shorry J: “We wanted to focus on our musicianship this time around. We named the album “Navigation” to show how we will mark our vision from here on out. We’ll show skills we haven’t been able to show previously during our promotions.”

Sangchu: “We’ve received a lot of attention from our featurings in the past, but I hope that people will focus on the quality of our production this time around. The title track perfectly fits for the fall weather with a medium tempo so we really look forward to how well it’s received. It took a lot of time to choose the title track because all the songs are of such calibre, but we chose “When It’s Like This” because it best fits with the season.”

They have a strong attachment to this album. This will be the last album they’ll promote together before Sangchu goes off to the military. Because they’ve experienced placing 2nd on music programs often in the past, their goal is to receive 1st place before he enters service.

Sangchu: “It would be great if we could place 1st before I enter the military. Haha!”

Sangchu entering the military is creating a lot of buzz. He’s been placed in Level 4, meaning that he’ll serve as a public service agent. It’s because he has broken his shoulder, torn his ligament and had a serious neck injury during his broadcast filmings. However, after his status was revealed to the public, he diligently received physical therapy and placed in Level 3 after a reexamination. This is a very rare case.

Sangchu: “I worked hard receiving physical therapy. It hasn’t hit me yet. I don’t know how I’ll feel in a week, but I just want to do my best attending all of my schedules right now.”

Shorry J is thinking about collaborating with another singer and promoting solo during Sangchu’s time in the military. Mighty Mouth will definitely continue to keep their unique image.

Sangchu: “We will continue putting out songs that make people feel good. We’d like it if people think of us as a fun, cheerful duo. I’m going to work really hard until I enter the military, so please give us a lot of love.”

Soompiers, speaking about love, you can order a personal copy of Mighty Mouth’s “Navigation” at our very own Soompi Shop!

Mighty Mouth
KPLG
How does this article make you feel?