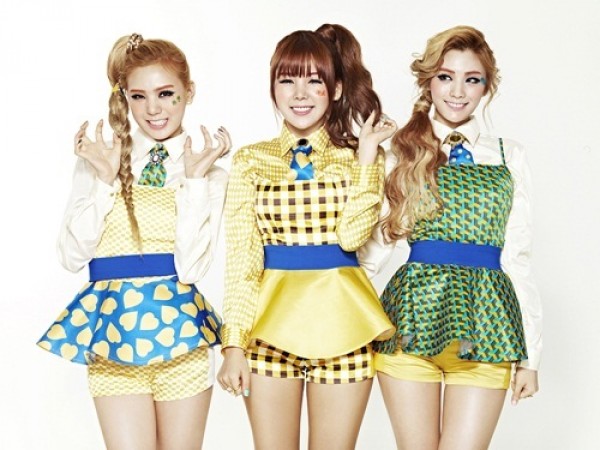 Orange Caramel, After School‘s subunit group, made a big come back with their first regular album “Lipstick.” It’s been nearly a year since their last album, “Shanghai Romance.” The three members, Raina, Nana, and Lizzy, are still charming and of certain indescribable characters in their unique Orange Caramel way.

Orange Caramel first shocked K-pop industry with unprecedented, unique concept. They stood out the most in all subunit idol groups with songs like “Magic Girl,” and “Shanghai Romance.” Every single song they released was a big hit and such success allowed Orange Caramel to release their first regular album. The members seemed proud of themselves with their achievements so far. Nana stated, “As this is a regular album, it is of much higher quality. I’m really happy with it. Handing out these big, pretty CDs allow me to be confident, too. I’m really proud of us for what we’ve achieved. It’d be ideal if we could continue this and release our second and third regular albums.”

As this is their first regular album, Orange Caramel made sure that it has a lot to offer. Lizzy said, “I heard that this is the most expensive album made in the history of our agency. Since we put a lot of efforts into this, I want to do all of my best to make the best of it.” The album includes all previous hit songs from Orange Caramel’s mini albums, solo titles of each members, and a few new songs. They kept their addictive melody and unique sound. In their title song “Lipstick,” Orange Caramel perfected their signature style with electronica sound.

Since their debut, Orange Caramel has broaden their horizon. They released their Japanese debut single “Yasashii Akuma” on September 5 and officially started their overseas promotions. When asked about their opinions of making a debut in Japan, Raina responded, “It’s something we didn’t even think of at first. Now that we’ve made it this far, I want to do better.”

Orange Caramel is also busy partaking in After School’s activities. Recently, After School went through a drastic change as leader Kahi graduated from the group. The sudden absence of a leader pressured the three members of Orange Caramel, who joined After School around the same time. Raina explained, “The absence of Kahi was a lot to deal with. It was nerve-wrecking and there has been many changes since she left. We didn’t want people to think we are not as good as we used to be because Kahi isn’t with us anymore. Such thought motivated us to practice so more and harder. During the promotion of ‘Flashback,’ we didn’t slack off once. It was all work, no play.”

Since After School’s let go of three members, Kahi, Becca, and So Young, through their graduation system, one might wonder when the other members are going to graduate. When asked about their graduation, Orange Caramel responded, “Graduation isn’t something that you go through just because you or someone else want to.” Raina added, “I’m guessing that we won’t be graduating for a while. It’s not something we could do just because we want to. You have to be prepared to be on your own to graduate. Even though one of us might graduate from After School sometime in the future, I don’t think that will affect Orange Caramel. It’s a graduation from After School, not Orange Caramel, so they must be separate, right?”

Wrapping up the interview, Lizzy cautiously expressed her hopes in this promotional cycle of Orange Caramel. She said, “My goal is to not get hurt and finish our promotion in Korea successfully. We haven’t won the first place on music shows, yet. I really want to win the first place with ‘Lipstick’ and cry on stage. I think we are going to wail on stage if it happens.”