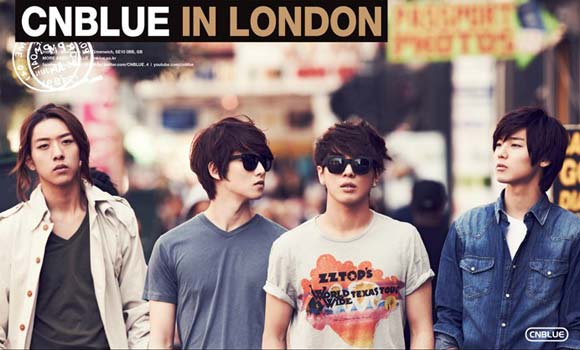 Boy band CN Blue’s appearance at the London Airport caused a big commotion. A lot of European fans came out to give them a hot welcome.

They headed to London on September 20 to attend their first concert in Britain, “CN Blue Live in London.” It will take place on September 22. 400 fans went to the airport to take a peek of the handsome quartet.

CJ E&M is in charge of production for this concert and a representative shared, “We saw about 50 fans waiting for the group just 1 hour before their departure, but all of a sudden about 400 fans came. The fans shared the news of CN Blue’s arrival with other fans through SNS.” More than 95% of the fans who arrived on this day were European fans. CN Blue commented through their agency, “We’re very thankful, but truthfully we’re stunned. We didn’t think we’d receive a reaction like this.”

Their agency, FNC Entertainment continued, “It’s their first time trying to enter the European market, but we knew there would be fans through channels like Youtube, SNS and Korean shows. But it was much more than we expected.” The current fans are waiting anxiously for the concert. The venue seating 3000 people have been sold out proving how popular they’re being received.

The concert will be on September 22 at 7pm held in IndigO2 in Greenwich, London.

KPLG
Cn Blue
CN Blue Live in London
How does this article make you feel?