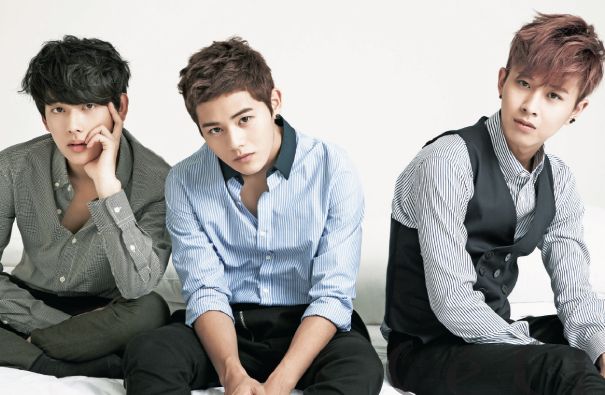 ZE:A members Siwan, Dongjun, and Minwoo Get Into Bed and Talk Girls With “Ceci”

ZE:A members Siwan, Dongjun, and Minwoo are featured in a photo shoot for the September issue of fashion magazine “Ceci.” The concept of the photo shoot was for the ZE:A members to get back into bed after suddenly finding out that an appointment they had was moved to a later time. So the boys are all dressed up but now find themselves with a bit of free time. The boys look adorable lounging about and playing into the camera.

To see ZE:A members Siwan, Dongjun, and Minwoo’s individual shots and read excerpts from their interviews, click through the pages.

Don’t forget to check out ZE:A’s thread on Soompi Forums.

On songs Siwan would sing as a morning wakeup call for his girlfriend, Siwan chose: 1. “Sunday Morning” by Maroon Five; 2. “Don’t Know Why” by Norah Jones; 3. “Followed” by Above Envy; 4. “Say It Again” by Marie Digby.

On his favorite time, Siwan said: “5-6 a.m. If you go outside at that time, you can see the sun just rising, and the scenery has quite a picturesque beauty. This morning, because I slept late, I couldn’t see it.”

On his ideal type, Siwan said: “Even though I don’t have an exact type, when I met our country’s representative girl groups or actresses in real life, I don’t think my heart can beat that fast. I am also a person.”

On good points he wants to steal from his members, Siwan said: “Hyungsik’s height. His height could give me 5 cm. without regret.”

On his 2012 goals, Siwan said: “To grow taller, to gain weight, for the members to live together safely and without any hitches.”

On songs Dongjun would sing as a morning wakeup call for his girlfriend, Dongjun chose: “Good Morning” by Verbal Jint.

On his favorite time, Dongjun said: “On non-schedule days, 5:30 a.m. When you just open your eyes, that’s the time I like to go back to sleep. Even today, getting that happy feeling of being able to sleep more, I get sleepy again.”

On his ideal type, Dongjun said: “Even though I think feelings are more important as opposed to looks, I have for a long time chosen Girls’ Generation member Taeyeon as my ideal type. In the future, I would like a girl who is kinder to my parents than I am. I will take care of my father-in-law and mother-in-law.”

On good points he wants to steal from his members, Dongjun said: “Hyungsik’s 184 cm. is a rare item that all the members envy. I am thankful that I am always told I look like Han Ga In.”

On a romantic breakfast, Minwoo said: “I’m open-minded about having meat and three square meals. But, in exchange, I would like kimchi and jigae (stew).”

On his charming point, Minwoo said: “I always make effort, I have confidence that if I had a girlfriend, I would do really by her. I am actually quite manly.”

On good points he wants to steal from his members, Minwoo said: “Siwan’s face, Kwanghee’s hair. Hyungsik, who suddenly got hot, he was always hot, but now it really shines, so I am glad about that. I want to follow the older members, who always worked hard and to whom I am thankful.”

CeCi
Dongjun
Minwoo
ZE:A
KPLG
Siwan
How does this article make you feel?