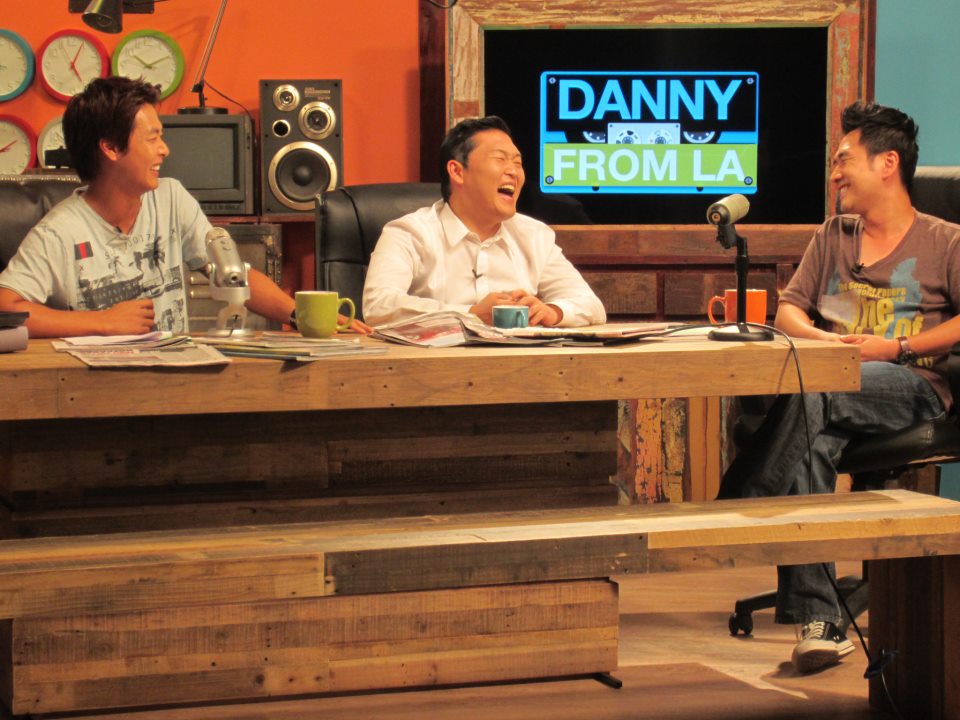 On September 20, PSY was the guest star on MNET’s new show “Danny From LA.” 1TYM member Danny Im and U.S. comedian Kevin Shea are hosts of the show. Danny Im returned to the spotlight, after six years working behind the scenes for YG Entertainment, with Mnet show “Danny From LA” which premiered on September 13. Mnet show “Danny from LA” will be aired weekly and feature 1TYM’s Danny Im and Kevin Shea giving an insider’s perspective on Asian pop culture, entertainment, and music. Check out Soompi’s exclusive interview with Danny!

In the first segment of the show, Danny talks about PSY’s discography and singles, and Korea’s reaction to his music. PSY has released six albums including his latest which are: “PSY from the PSYcho World!,” “Sa 2/Adult Only,” “3 PSY,” “Sa Jib,” “PSY Five,” and “PSY Six, Part 1.”

In the second segment of the show, PSY comes out and they talk about “Gangnam Style.” Kevin Shea jokes that the first time he saw PSY’s video, he thought, wow, he didn’t realize that Kim Jong Un (Supreme Leader of North Korea; Kim Jung Il’s son) had a music video. PSY took it like a champ and laughed. They then discuss the horse dance and how NFL legend Deion Sanders used to do it when he scored a touch down. Kevin Shea gave PSY props for getting girls to do it. PSY talks about his hair style and how the first time he went to a hair salon, after getting his hairstyle, he felt it was amazing and decided to do it for the rest of his life. They discuss the 2012 MTV VMAs and the Katy Perry kiss. PSY said that, since his debut, he always had a dream that if he ever were to show up on an American awards show, he would speak Korean. PSY also clarifies that Katy Perry posed with her cheek against his and that she didn’t actually kiss him. Kevin Shea says if it was him, he would have given her a low hug. PSYcracks up.

In the third segment of the show, PSY talks about Hyuna and “Gangnam Style” parodies. Then Danny, Kevin Shea, and PSY dance. Danny breaks out the moves and, after being complimented by PSY, says, “That’s right! Former K-pop artist!” (Author’s note: PSY has an amazing speaking voice and is a great teacher.)