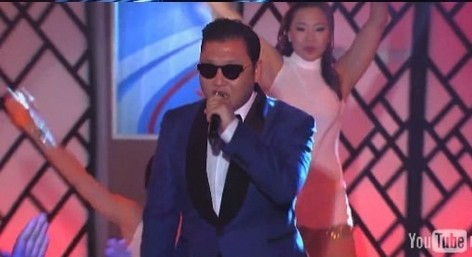 Just when you thought things were dying down for international star Psy, he has recently appeared on ABC’s “Jimmy Kimmel Live” and has shown America his “horse riding” dance once again.

Psy appeared and performed on “Jimmy Kimmel Live” on October 2 but the show was recorded when during Psy’s three week stay in America back in September.

During the show, as soon as the host Jimmy Kimmel introduced Psy, Psy gave an energetic “Gangnam Style” performance, which made the crowd go wild. Cuts of the audience members dancing along to “Gangnam Style” especially drew eyes.

Psy, who is currently in Korea, is working hard as always, performing in various college festivals and preparing for other concerts and broadcast appearances. Some netizens in Korea voiced concerns that Psy’s absence in America may cause this recent “Gangnam Style” craze to die down. However, Psy will be returning to America on October 15 to continue promotions and work on future projects.