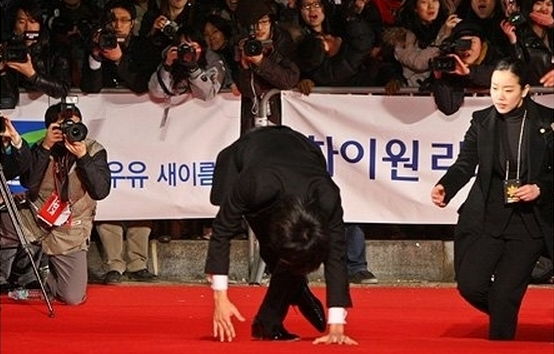 Earlier this week, actress Han Ji Min made headlines with her gorgeous gown, as well as an embarrassing fall, at the “2012 Korea Drama Awards,” which took place at the Gyeongnam Arts Center in Jinju. Her stumble triggered memories of Lee Min Ho’s epic fall on the red carpet several years back. As such, we decided to recapture several infamous plunges on the red carpet and compile them for your viewing pleasure. Browse through the gallery by clicking on the page numbers at the bottom of this article!

IU slips on her way to receive her award at the “Melon Music Awards” in 2011.

Han Eun Jung steps on her dress and stumbles at the “KBS Drama Awards” in 2010.

Actress Kim Min Hee accidentally steps on her dress and slips on the red carpet at the “30th Blue Dragon Awards” in 2009.