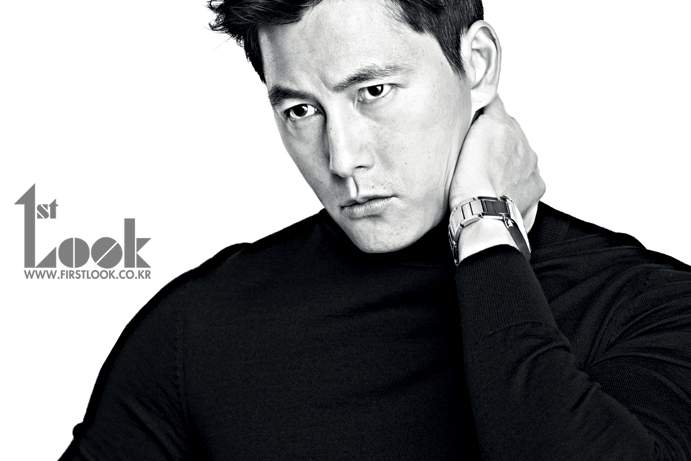 This pictorial was for “First Look” magazine and has been released on October 4. Jung Woo Sung showed off a variety of classic suits and reflected a classy and masculine attraction. The photo shoot was held with a simple background so Jung Woo Sung’s facial expressions and poses could be emphasized.

After the photo shoot, Jung Woo Sung sat down for an interview where he spoke about his recent work with directing. He said, “When I act, I try to make the characters in my imagination come to life in reality. But working as a director or a part of the staff means that you have to make the make-believe places and images all come to life as well. Filming is like putting together pieces of a montage and making it flow. It’s so different and fun.”

Jung Woo Sung was picked as the man that the men of Korea want to most resemble. To that he said, “The more my experiences increase, the more I hear things from people around me. But when I look at myself, I’m an individual and just a guy. I don’t really see myself the way people see me. I think I’m focusing on how to age well as I satisfy my aspirations. I think aging is very important. So I think I should try to age better and show everyone.”

He picked fellow actor Lee Jung Jae as his lifelong friend. He said, “I went through some difficulties a few days ago and I realized again how important it is to have a friend you can respect. I met him through ‘There Is No Sun‘ but back then, our agencies kept wanting us to have a rivalry image. But despite that, we quickly became very close.But because we each have our own experiences and we respect each other so much, we didn’t speak informally or treat each other too comfortably. We still don’t speak informally now. Speaking formally to one another is very comfortable for us. We can talk about work or our personal lives. He is a friend who keeps me on my feet. I think I have a very valuable friend.”

Jung Woo Sung revealed that he would like to work on a romantic comedy for his next project. “It’s different from other genres because the lifestyles of that generation and time have to be included so it is a very high-class genre. I haven’t tried it yet but I think with my age right now, I’ll be able to do a good job. So I told a lot of people to tell me if they see any good projects out there.”

Check out the gorgeous photos of Jung Woo Sung in his “First Look” pictorial!