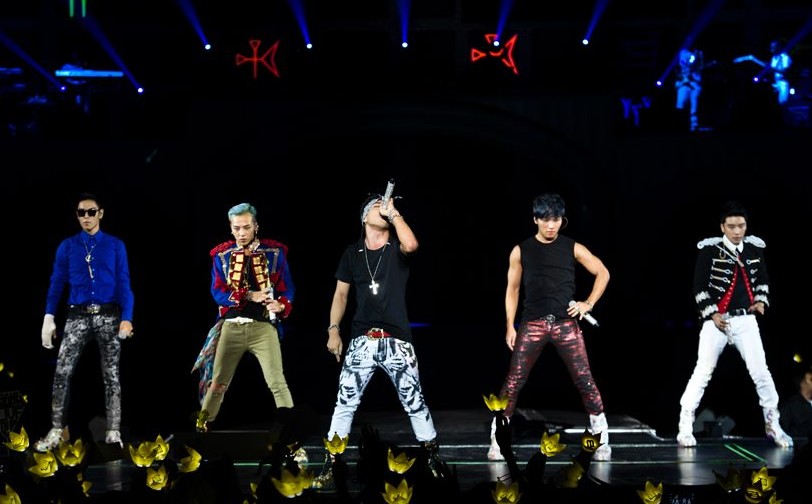 Big Bang performed magically at their two-night sold-out concerts in Singapore last Friday and Saturday! This was Big Bang’s first-ever full scale concert and was organized by Lushington, Launch and Live Nation.

I certainly wasn’t a fan before and couldn’t quite comprehend the excitement that my friends shown me after they found out I was going to Big Bang’s concert. In reality, some of their songs were too noisy for my liking, but yes, I do love some of their songs, as well.

The five men made an explosive entrance and immediately whipped the audience into a frenzy although many people stood aghast at the horrible sound system. During the opening song of “Tonight”, it was really difficult to hear the members’ voices, which was no fault of theirs. Fortunately, much of the squeaky sounds have eased off soon after.

Everything about G-Dragon simply oozes charm, it is difficult to be not attracted to him! It’s a joy to just watch him do his signature dance moves, and it’s so easy to tell that GD is enjoying his time on stage, that he wasn’t merely putting up a show to please the fans.

When I first set my eyes on T.O.P from my I-can-touch-the-ceiling faraway seat, I chuckled a little when I thought I saw a big white oven glove on T.O.P’s right hand. Kudos to T.O.P for his professionalism in giving fans the time of their lives even with a heavily bandaged right arm. T.O.P sustained injuries during the filming for movie “Alumnus.”

I have to confess that I have never paid much attention to the individual vocals of the members, so I felt as though I have found gems in Taeyang and Daesung during their solo performances.

Seungri was speaking a lot of English to much delight of VIPs, he kept egging Daesung to speak in English too.

“Hey D, do you know this place Singapore’s mascot? Merlion?”

“Merlion’s head is a lion, and the body is a fish. It is smart and strong, like Big Bang!”

Seungri went on to share that they ate chili crab, that they ate too much and it was too spicy for them even though they are Koreans (who are great at eating spicy food.)

Most Korean concerts have elaborated stage props, many costume changes and pyrotechnics. What is different with Big Bang’s concert is the evident focus on music alone. What others accomplished in 4-hour concerts, they did it in half that time. I have omitted much of the concert details in this review, because you need to be at one of their concerts to witness it for yourself.

Big Bang will next perform in Thailand Bangkok on Oct 5 and 6. For a full schedule, check out the Big Bang Facebook page. Many thanks to concert organizers Lushington and Launch for inviting Soompi to cover the concert.