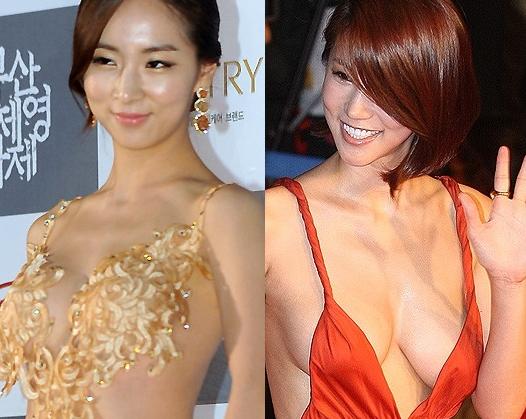 Is Actress Bae So Eun’s Revealing Dress Going to Make Her the New Oh In Hye at the BIFF?

For those who were around for last year’s BIFF (Busan International Film Festival), you may remember that Oh In Hye was quite possibly the most spotlighted actress during the event. For those who don’t know, Oh In Hye quickly and infamously rose to fame due to her scandalous and revealing dress.

The 17th Annual BIFF has started yet again this year and actress Bae So Eun has rapidly topped headlines with her provocative dress as well.

The opening ceremony was held on October 4 to a glamorous and glitzy start with numerous actors and actresses decked out in their fanciest formal wear on the red carpet. Female stars were once again not afraid to show some skin but among those, Bae So Eun especially drew eyes for her golden/nude dress with a plunging front line and cut out sides.

This attention is reminiscent of last year’s Oh In Hye at the 16th Annual BIFF. Oh In Hye sported a dress with a deeply plunged front that exposed a lot of her chest line. As much as she received much attention, she was also met with a lot of negative comments on her choice of exposure.

Meanwhile, the 17th BIFF will start today from October 4 and last until October 13 for 10 days.

BIFF
Oh In Hye
KPLG
Bae So Eun
How does this article make you feel?