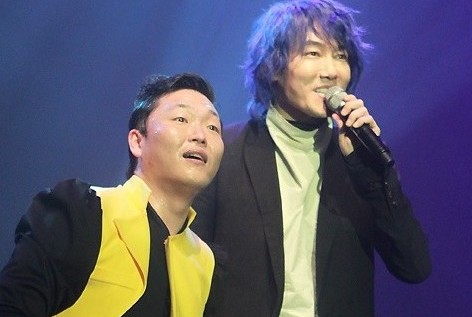 The Full Story: Discord Between Once BFFs Psy and Kim Jang Hoon

In rather surprising news, Psy and Kim Jang Hoon, once widely known to be best friends in the Korean music industry, has been recently swept up in rumors of discord. These rumors are becoming a bigger issue due to Psy’s recent success.

Recently, singer Kim Jang Hoon had left several me2day posts that sounded depressing and even suicidal, which left many fans worried. His posts talked about a betrayal of a close friend and many have assumed that friend to be Psy.

On October 6, Kim Jang Hoon posted, “Let’s stop. That friend has to do his overseas promotions and he also has to show his patriotism [to Korea]. So even though I hate him, I won’t be saying this or that,” basically confirming that his discord with Psy is indeed true.

In 2004, things soured up again when Psy claimed to have made some upgrades to his concert after receiving some ideas from Kim Jang Hoon’s concert. Then, Kim Jang Hoon accused Psy for plagiarizing his ideas from his concert. Psy retaliated and said that it isn’t plagiarism if it’s one artist using what he learned from another artist, who is his senior.

For two years until 2006, the two grew apart while continuing to throw grand, big-scale concerts on their own.

It wasn’t until 2007, the year that Psy enlisted in the army, that the two artists began their reconciliation. Kim Jang Hoon told Psy, “I hope you quickly finish your service so you can return back to the stage.” Psy warmly received Kim Jang Hoon’s words and they became friends again.

In 2009, the two combined forces and set up a concert agency called “Concert World” and became a famous duo. They even put together a joint concert called “One Touch” and attracted more than 300,000 people all over the country.

Last year during the “One Touch” tour, Psy revealed, “Jang Hoon hyung is obsessed with creativity. He doesn’t like to borrow from others. When he came to my concert and we ended up having a dispute. We didn’t talk for two years from 2004 to 2006. When he released ‘Rain Shower,’ we made up.”

However, Kim Jang Hoon decided to put an end to the “One Touch” tour last year, saying that it’s best to leave when the audience is still applauding. This caused rumors of their discord to pop up again at the beginning of this year. This past May, Kim Jang Hoon was a guest on “Come To Play” and revealed that he and Psy even got into a physical confrontation over the “concert plagiarism” issue.

Last month, one of Kim Jang Hoon’s me2day posts added fuel to these reignited rumors of discord. He posted, “I remember Lee Seung Hwan spoke out about his concert being plagiarized and things got crazy. Now that I’m in his shoes, I can understand what he went through.”

Recently, as if Psy was responding to that post he said, “I want to show everyone how well Korean people can party on stage. I learned all about concerts from Kim Jang Hoon. I will take what I’ve learned from Jang Hoon hyung and go overseas to show them as well.” This attempt of reconciliation happened on October 2 during one of Psy’s concerts in Seoul.

However on October 5, Kim Jang Hoon posted a series of me2day messages that showed that their discord was not over. After Psy’s free concert at Seoul’s City Hall on October 5 in the wee hours of the night, Kim Jang Hoon posted, “I think I took too much medicine. I’m a fool who can’t stand to be betrayed by the ones I trusted. By chance, please don’t curse at me. Don’t be sad for me. Hyung is sorry. I’m going now,” which made him sound suicidal.

Later on, it was known that Kim Jang Hoon was in the hospital for psychological treatment when he made that post. It was also revealed that Psy visited him in the hospital on October 5 and the two of them spoke for over 8 hours, which resulted in a peaceful atmosphere.

But again on October 6, Kim Jang Hoon posted, “I won’t be posting for a while. My album that was due to be released in November has been pushed back (in other words, I’m screwed). I will try to take in all of this alone and until I organize my thoughts, I will be leaving Korea,” and “Please leave me alone. It’s hard enough for me. I just want to rest. Imagine how bad it is for me if I say that I’m leaving the country that I love. Please let’s stop now.”

Sources from Psy are saying that after Psy’s visit to the hospital to talk to Kim Jang Hoon, things have been fine between the two. Kim Jang Hoon is currently resting under close care.

Kim Jang Hoon
PSY
KPLG
How does this article make you feel?