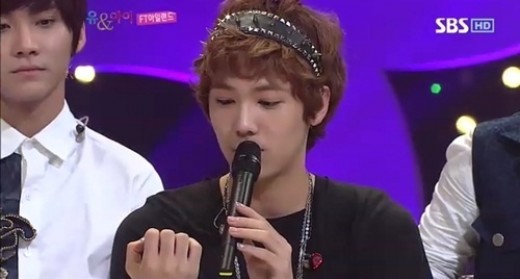 On the October 8 episode of SBS “Jung Jae Hyung and Lee Hyori’s You & I,” FT Island’s Lee Hongki made a guest appearance and talked about his love for nail art.

The show’s MC Hyori first asked, “It looks like you’ve gotten nail art work done. I’ve heard that nail art is your hobby, but is that true?”

Hongki responded, “At first, I was a little hesitant and asked myself, ‘what guy would get manicure work done.’ But my friends told me that I would look good with nail art, so that’s how it all started.”

“It was really awkward in the beginning. But rock bands usually get a lot of nail art work done for their visual appeal. It made me think it could become my own unique characteristic,” he continued.

The other MC, Jung Jae Hyung, in response, said, “It looks good. People would have had wrong thoughts if I had done the same thing,” making the whole crowd burst into laughter.

Netizens commented, “Lee Hong Ki looks pretty with his nail art,” “I thought he was a girl at first, so pretty!” and “I’ve never heard a guy get a manicure.”

FTISLAND
Lee Hong Ki
KPLG
Hyori
You &amp; I
F.T. Island
How does this article make you feel?