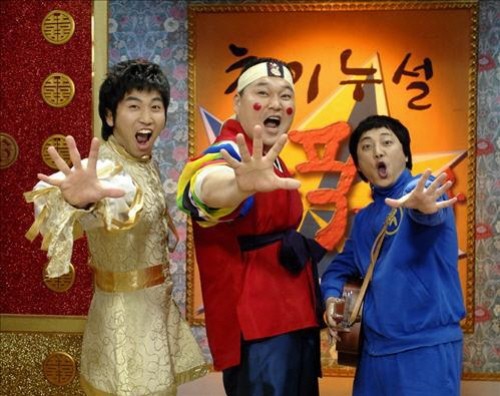 On October 8, it was reported that Kang Ho Dong would make a return to his popular variety show, MBC “Knee Drop Guru,” in late November. The news comes 10 days after Kang Ho Dong confirmed his comeback to SBS “Star King,” another top variety show that used to be hosted by the comedian.

“We can’t reveal the exact broadcasting date, but we’re expecting late November or early December,” an official from MBC said. Unlike its previous format, when it was part of “Golden Fishery,” the new “Knee Drop Guru” is expected to be an independent program that airs on Thursday evening.

If the new “Knee Drop Guru” does start broadcasting on Thursday night, that means it will air in the same prime time slot as KBS “Happy Together,” which is hosted by Yoo Jae Suk. With the nation’s top two MCs expected to go head-to-head during the Thursday night time slot, fans and industry insiders are already expecting a fierce TV ratings battle.

Kang Ho Dong has been “temporarily” retired from all TV activities following his tax evasion charges in October last year. After nearly a year-long hiatus, Kang Ho Dong recently signed a management contract with SM C&C, an affiliate of SM Entertainment, and announced his comeback through SBS “Star King” just 10 days ago.