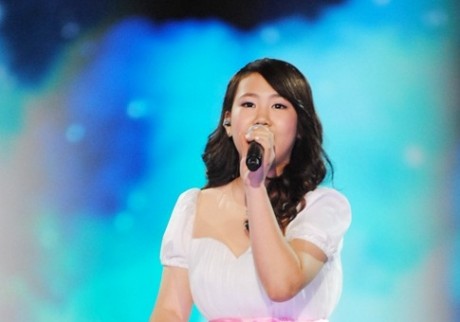 The winner of SBS’s popular singing competition “K-Pop Star,” Park Jimin has made her debut as part of a female duo 15&.

After winning the highly competitive talent show, Park Jimin had the chance to choose between the JYP, SM and YG who together are known as the “Top 3” and ultimately decided to sign with JYP.

She recently had the chance for an interview with a local newspaper where she could express her thoughts about “K-Pop Star” and JYP.

First, Park Jimin commented, “I went to JYP after ‘K-Pop Star,’ but didn’t think that I could’ve made a debut this soon. It was a valuable experience and a great opportunity being able to perform together with respected singers and receive words of wisdom from the very same people.”

She was asked, “Do you regret joining JYP?” and responded, “I don’t regret picking JYP. I like it more after joining. I was given the first month to transition into the training. Afterwards, the lessons focused on my weak points like expressing while singing. I also focused on learning the song’s meanings to better express them. I wondered if producer Park Jin Young is just the same off stage as when he was the judge on ‘K-Pop Star,’ but he’s just the same. Just like on the show, he does his best to teach and it makes me motivated that I should become better.

“K-Pop Star” is soon airing it’s 2nd season. The reporter asked Park Jimin to share her wisdom. “The audition was an opportunity where I discovered parts of myself I didn’t knew existed. I’ve learned and improved a lot. It would be great if you never hide yourself and show everything that you can. You will get a better response the more you put into it. However, if I had the chance to do this again I probably couldn’t. The competition was truthfully really hard. I don’t want to think about competition after I debut, but to just enjoy the stage.

Park Jimin has made her debut with Baek Ye Rin who’s the same age. Their title track is “I Dream,” to express these two girls realizing their dreams.

Soompiers, do you think Park Jimin made the right move to join JYP instead of SM or YG?

JYP Entertainment
Jamie
KPLG
15&amp;
How does this article make you feel?