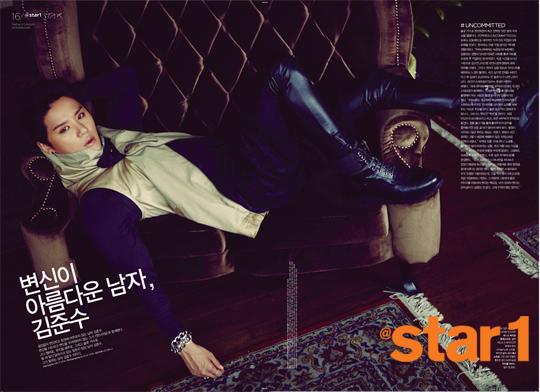 JYJ’s Junsu on @Star1: “I Didn’t Want to Release an Album at First”

JYJ’s Junsu was featured in an exclusive photo shoot and interview with fashion/beauty magazine @Star1 this month. In the interview Junsu talked about his career as a musical star, solo artist, and a member of JYJ.

“In Korea, we spend a lot of time recording but in the U.S. it’s more about talking and opening up with each other during the recording. If we recorded for 4 hours, we would spend over 2 hours just talking and planning. Also, they would treat me overly well, telling me to take a rest whenever my voice was gone. I learned how the best staff members operate,” Junsu said.

He went on to discuss his solo album and music career. “It depends on how you see it, but I think it’s a huge success considering the concerns I had prior to releasing the album. Honestly, I told my agency that I didn’t want to release an album when I was first asked to it. It just felt like it was impossible to run album promotions without any TV appearances,” he said.

You can see the rest of the photo shoot by clicking the arrow at the bottom right of the top image. Enjoy the photo spread!

Junsu
JYJ
KPLG
@star1 magazine
How does this article make you feel?