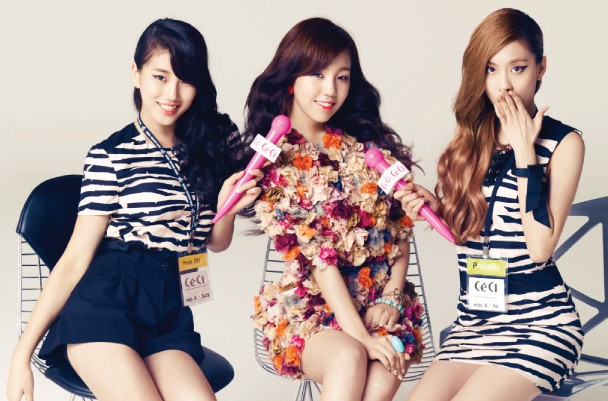 miss A and Baek Ah Yeon Pose for “CeCi” Magazine

Popular girl group miss A has recently become guest editors for a supplement volume for the fashion magazine “CeCi” in its October edition.

The supplement volume is called “miss A Becomes CeCi’s Guest Editors” and each member of miss A took responsibility for interviews, the fashion and features in the magazine.

In this supplement volume of “CeCi,” miss A provides their own beauty stories as well as conducts an interview with a star they chose themselves. The star is none other than “K-Pop Star” season 1 contestant Baek Ah Yeon. Fei and Suzy prepared their own interview questions for Baek Ah Yeon.

Baek Ah Yeon spoke about many things including her intensive 4 month training and practicing before her debut. Since she quickly entered the K-Pop scene, she admits that things are still new and awkward for her.

She also spoke about how it feels to be debuting with her fellow “K-Pop Star” contestants such as Park Ji Min and the girls of SuPearls. She said, “We told each other that we’ll be seeing each other in the ‘Inkigayo‘ waiting room and that day is not far off. Since I debuted first, I keep reminding myself that I should do well as an unni.”

The full interview can be found in the October edition of “CeCi,” on which BEAST is the cover model. Check out the photos of Baek Ah Yeon and miss A below!

CeCi
miss A
Baek Ah Yeon
KPLG
How does this article make you feel?