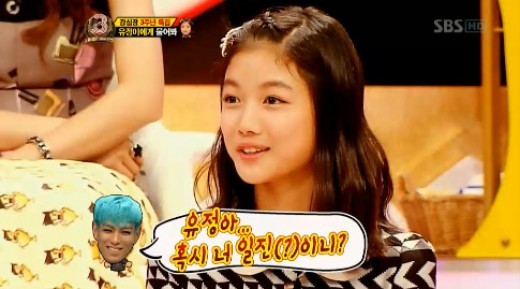 Kim Yoo Jung: “Big Bang’s T.O.P Asked Me If I Was Part of a School Gang”

Kim Yoo Jung recently cleared up the rumors about her being in a school gang.

Kim Yoo Jung was a guest on “Strong Heart” on October 9. She shared her story about how she met Big Bang‘s T.O.P. She revealed how T.O.P. asked her if she was in a school gang.

Kim Yoo Jung said that she’s been a Big Bang fan since she was 10 years old. Recently, she got to work with T.O.P. on an upcoming film, “Classmate.” Kim Yoo Jung shared, “I met T.O.P for the first time when we started to film. The director told us to hold hands and talk to each other so we can get closer,” and “T.O.P oppa did a lot of research on me on the Internet. Then suddenly he asked, ‘Are you in a school gang?'”

This is because when Kim Yoo Jung’s name is entered in search portals, the first related keyword is “school gang.” So Kim Yoo Jung cleared up, “I am not part of a school gang,” as she explained that many people mistake her for a school gangster because of her piercing eyes.

She continued, “There was even a post made online saying how I asked for money when someone asked me for an autograph,” and “I would never sell my autographs for money. I think it’s funny when I see those rumors or bad posts about me.”