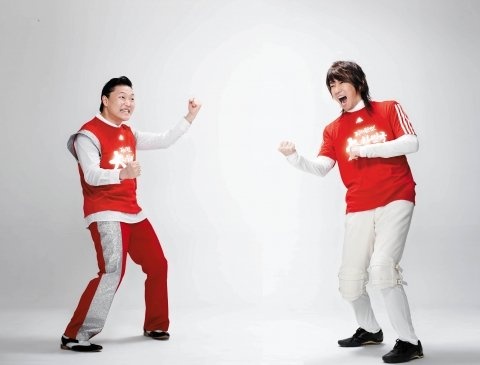 Kim Jang Hoon on Psy: “We Didn’t Reconcile Yet But I Should’ve Been More Mature”

Singer Kim Jang Hoon opened up about the rumors of discord between himself and Psy for the first time. He admitted that he wasn’t being a grown-up about it and that he’s waiting for Psy to visit him again in the hospital.

Kim Jang Hoon, who was depressed to the point of suicide because of his broken trust with Psy, has recently spoken up.

On October 5, sources from Psy told the press that after Psy visited Kim Jang Hoon in the hospital, they have reconciled and everything was fine. But Kim Jang Hoon seems to think otherwise.

“He just gave his excuses. The word ‘reconcilation’ can’t even be brought up yet,” he said.

However, Kim Jang Hoon admitted that he wasn’t being mature and said that he was waiting for Psy to visit him again in the hospital.

“The blame will always fall on the older person. The situation made me so angry but it’s my fault for making things so big like this. I know Psy’s situation is so good for our country right now so it’s unfortunate that my emotions got the best of me at this timing,” he said.

Netizens and fans are hoping that the two singers will quickly reconcile so that they could stand up on stage together once again.

Kim Jang Hoon added, “Since Psy is younger than me, I think I should have a bigger heart. I really want to live in harmony with others.”

We hope that the two will quickly find it in their hearts to reconcile!

Kim Jang Hoon
PSY
KPLG
How does this article make you feel?