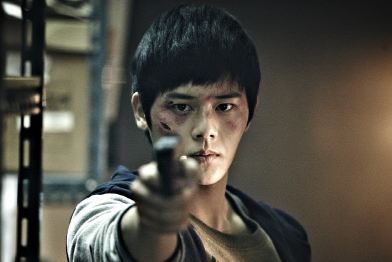 On October 9, “A Company Man” stars So Ji Sub, Lee Mi Yeon, Kwak Do Won, and ZE:A member Dongjun appeared on the red carpet of the press preview of the film which was held at the Dongdaemun Megabox theater in Seoul.

“A Company Man” is about a man named Hyun Do who appears to be a white-collar worker or company man like any other, but is actually a hit man. Hyung Do one day meets the wife of one of his targets, falls in love, and wants out of the profession. But the seemingly simple decision of wanting to quit the business has severe consequences for Hyung Do and the people around him. So Ji Sub plays Hyung Do who is the hit man who one day falls in love and wants out. Lee Mi Yeon plays Su Yeon with whom Hyung Do falls in love. ZE:A member Dongjun plays the character of Rahoon who works part-time in the company that Hyun Do wants to quit.

“A Company Man” will be released on October 11. You can check out the trailer on Soompi.