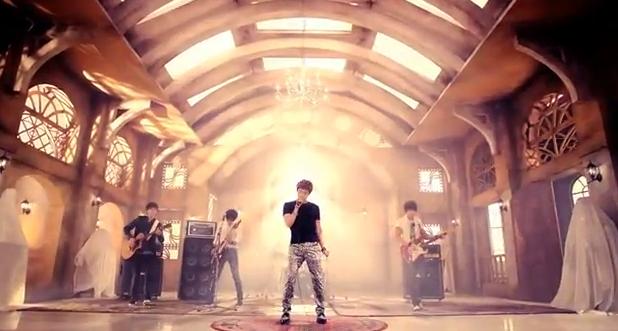 Over the last few years, we’ve seen a series of new “flower boy bands” debut, creating an industry trend of groups with pretty looks and top musical talent. “Flower boy bands” refer to rock bands that play the instrument, and but have the looks of a good looking idol group.

In this article, we’ve put together some of the most popular and recognized “flower boy bands” in today’s K-Pop. Some of them are more well-known while some of them just recently debuted. Take a look and let us know if we missed any!

Scroll through the list by clicking the arrow at the bottom right of the top image!

Comprised of Jung Yong Hwa, Lee Jong Hyun, Lee Jung Shin, and Kang Min Hyuk, CNBlue is perhaps one of the most popular “flower boy bands,” possessing both the good looks and amazing stage presence. Ironically, CNBlue first debuted in Japan in 2009, and after gaining a following there, made their Korean debut the following year with “I’m a Loner.” Yonghwa may be the most recognized member, especially because of his appearance on “We Got Married,” but all members are equally growing in popularity.

LED Apple was first formed in 2010 by Startory Entertainment. The “LED” in their group name is in reference to Led Zeppelin, supposedly their role model band. The “Apple” part is representative of the group’s fresh image and musical style. They’ve released consecutive hit singles with “Time Is Up” and “Sadness,” and although Kun Woo’s no longer with them, they are continuing to expand their fan base.

Formed in 2004, TRAX is SM Entertainment’s first rock band that was produced in partnership with X-Japan’s co-founder Yoshiki. Although we’re not so fond of the meaning behind their group name – TRAX stands for “Typhoon of the Rose Attack on X-Mas” – they’ve released many hit tracks based on alternative/metal rock and pop rock. With Jay’s enlistment in Korean army in 2012, the band has suspended all activities now.

Perhaps the first “flower boy band” to debut in K-Pop, Click-B made waves with their combination of musical skills and good looks. They were produced by DSP Media, who also managed Fin. K.L. and Sechskies, and started with seven members. Although the band split in 2002, they still have some loyal fans, which explains why they made a comeback last year with three members.

Nega Network’s new boy band, Lunafly, is the latest group to join the “flower boy band” trend. Led by Sam Carter, the half-English, half-Korean singer that rose to fame with his participation in “Star Audition,” Lunafly is based on acoustic sounds and soft vocals. Nega Network has a track record of producing musically talented groups, such as Brown Eyed Girls, so we expect more things to come from Lunafly.