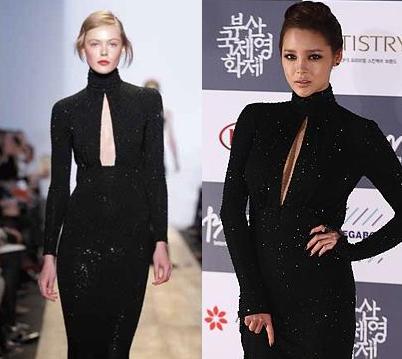 Who Wore It Better: Park Si Yeon vs. Runway Model

It’s time for another edition of Who Wore It Better! This time, it’s between sexy actress Park Si Yeon and a Caucasian runway model.

Park Si Yeon has recently rocked a glamorous dress that showed off her great, “cola-bottle” body.

While many female actresses shone on the red carpet of the 17th BIFF last week, Park Si Yeon dazzled with her sexy black dress. The plunging neck line as well as her bare back definitely rose temperatures during the event.

Recently, a runway model wearing the same dress was captured. Whereas Park Si Yeon is more curvy and voluptuous, the model showed off a skinnier and longer body with the same dress. The dress is the same but they each show off a different charm.

Meanwhile, the BIFF is still ongoing and will last until October 13.

Soompiers, who do you think wore it better?

BIFF
Park Si Yeon
Who Wore It Better?
KPLG
How does this article make you feel?