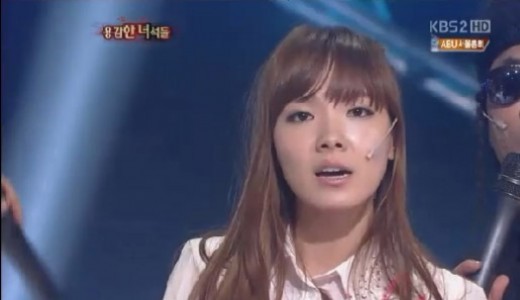 Watch out! Comedian Shin Bo Ra has done it again with the dissing and this time it’s headed toward Mnet‘s “Super Star K 4.”

On the episode of “Gag Concert” that aired on October 14, Shin Bo Ra appeared on the corner of “Brave Guys” and made her signature diss toward the entertainment industry. She targeted “Super Star K4” this time and criticized their decoy tactics and progress.

She continued to say, “It’s like every Friday night is Easter,” referring to the ‘resurrection’ of many of the “Super Star K4” contestants. When her fellow comedian Park Sung Kwang said, “If you’re so annoyed then stop watching it,” but Shin Bo Ra admitted, “But I can’t stop watching it,” expressing the addictive nature of the show.

“Super Star K” is infamous for its “devil editing” and the over-the-top suspenseful progress that leaves viewers hanging on the edge of their seats. Without surprise, this season of “Super Star K” also left many viewers frustrated because of the way it was edited to make it seem like certain contestants were disqualified, only to have them pass the round in the end.

Soompiers, what do you think about “Super Star K4” and their editing methods?