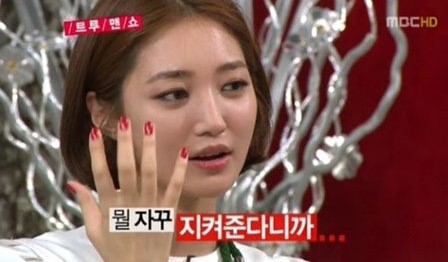 On the episode of “Come To Play” that aired on October 15, Go Joon Hee asked the male guests, “Men always say that they will protect the women [by not moving too fast] but they criticize platonic love. What do you think about that?” Then, Kwon Oh Joong, Eun Ji Won, Jay Park and other male guests answered, “There is no such thing as a platonic love.”

Go Joon Hee continued, “Women don’t want platonic love either. When the guy says, ‘I’ll protect you’ but doesn’t give any skinship, I think I’ll be really annoyed,” and “In the girl’s point of view, she can think, ‘Am I not attractive enough?'” She also said, “I’m not saying that having skinship is a good thing but I just wanted to know if men mean it when they say those kinds of things.”

At Go Joon Hee’s honesty, Kim Na Young also said, “I don’t like that either. I like it when things move fast,” creating much laughter.

Go Joon Hee’s next actions certainly proved that she is all for skinship. She chose Jay Park as the number 1 guy during the “True Man Show” corner and gave him a peck on the cheek.

Before she picked the number 1 guy, she promised, “I will give an unseen gift to the number 1 guy.” From the start of the corner to the finish, Go Joon Hee expressed her interest in Jay Park. She said she picked him because “He asked all the right questions.”

Other guests pretended to be annoyed at this and exclaimed, “I knew it from the beginning.” When Go Joon Hee revealed that her gift was a kiss, Jay Park couldn’t hide his joy. The other guests teased him saying, “If you guys kiss, you guys are dating from then on.”

Come To Play
Go Joon Hee
Jay Park
KPLG
How does this article make you feel?