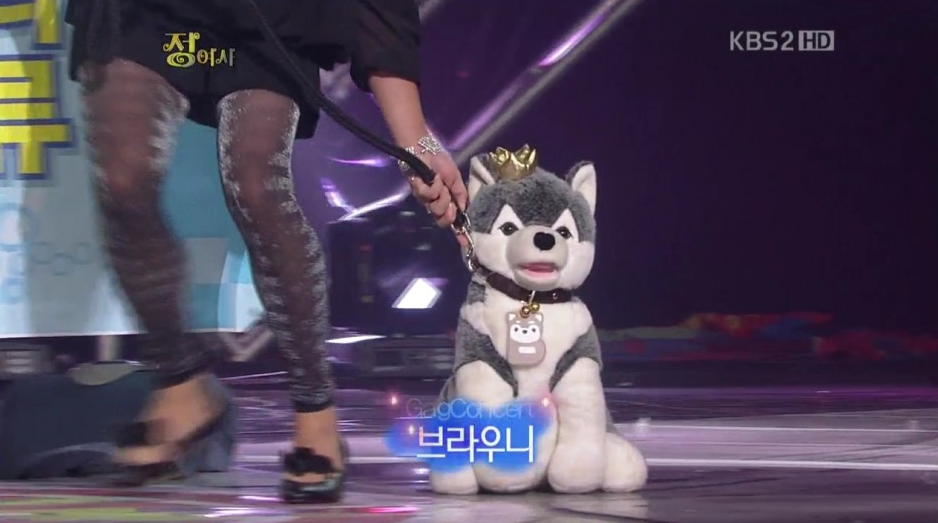 Brownie, the stuffed dog from KBS’s “Gag Concert – Madame Jung,” is on his way to becoming a super star. His popularity in Korea is enormous, as both children and adults are powerless to his irresistible charms. Brownie’s made guest appearance on several shows and has made headlines by showing off his crazy connections with Korea’s hottest celebrities.

Scroll through the gallery to see just how well-connected this little stuffed pup is!

Brownie shows off his best smile with Girls’ Generation’s Jessica.

Brownie receives a tight back hug from Girls’ Generation’s YoonA.

Brownie dances with Secret’s Han Sun Hwa on MBC MUSIC’s “All The K-Pop.”

Brownie surprises Park Hyo Shin with a visit on the day of his discharge.

Brownie attends the press conference for SBS’s “The Great Seer (aka Daepoongsoo)” and poses with actress Kim So Yeon.

Brownie smiles with the TS family backstage at “Music Bank.”

Brownie heads off to China with Cecilia Cheung

Brownie gets ready for a “Music Bank” performance in B.A.P.’s dressing room with Jong Up.

Brownie receives a back hug from B.A.P.’s Himchan.

Brownie poses with B.A.P.’s Dae Hyun before going on stage.

Brownie reads over a new manuscript with novelist Lee We Soo.