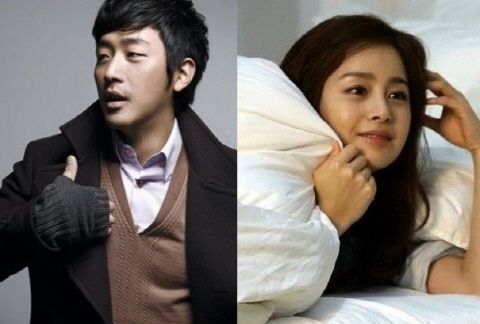 Actors Ha Jung Woo and Kim Tae Hee has been swirled into a dating rumor and netizens are having heated arguments about whether or not they think it’s true.

Rumors of the two actors dating have been posted on the web and had started to spread in the beginning of the year. Also, the fact that Ha Jung Woo recently broke up with his girlfriend added onto the fuel.

On October 16, Ha Jung Woo’s agency denied these rumors to be true. They said, “It hasn’t been long since Ha Jung Woo ended his relationship with his girlfriend and he is very busy with his current project so there’s no way that this is true.”

They continued, “Ha Jung Woo meets with Kim Tae Hee when they are at the same movie events or parties. It seems like sources from the movie industry have said a couple of things about the two in a passing by atmosphere while they were having a drink or two and that escalated to this rumor.”

Netizens are in heated arguments about whether this rumor is true or not. Search portals show that Ha Jung Woo and Kim Tae Hee are continually on the top rankings for search terms. They made comments such as, “They say that the rumor started with film insiders talking about them but there is no smoke without a fire,” “If Ha Jung Woo made an official statement to clear it up, I’m sure it’s not true,” and more.

Meanwhile, Ha Jung Woo is working on the film, “In Berlin,” which is set to be released next year.