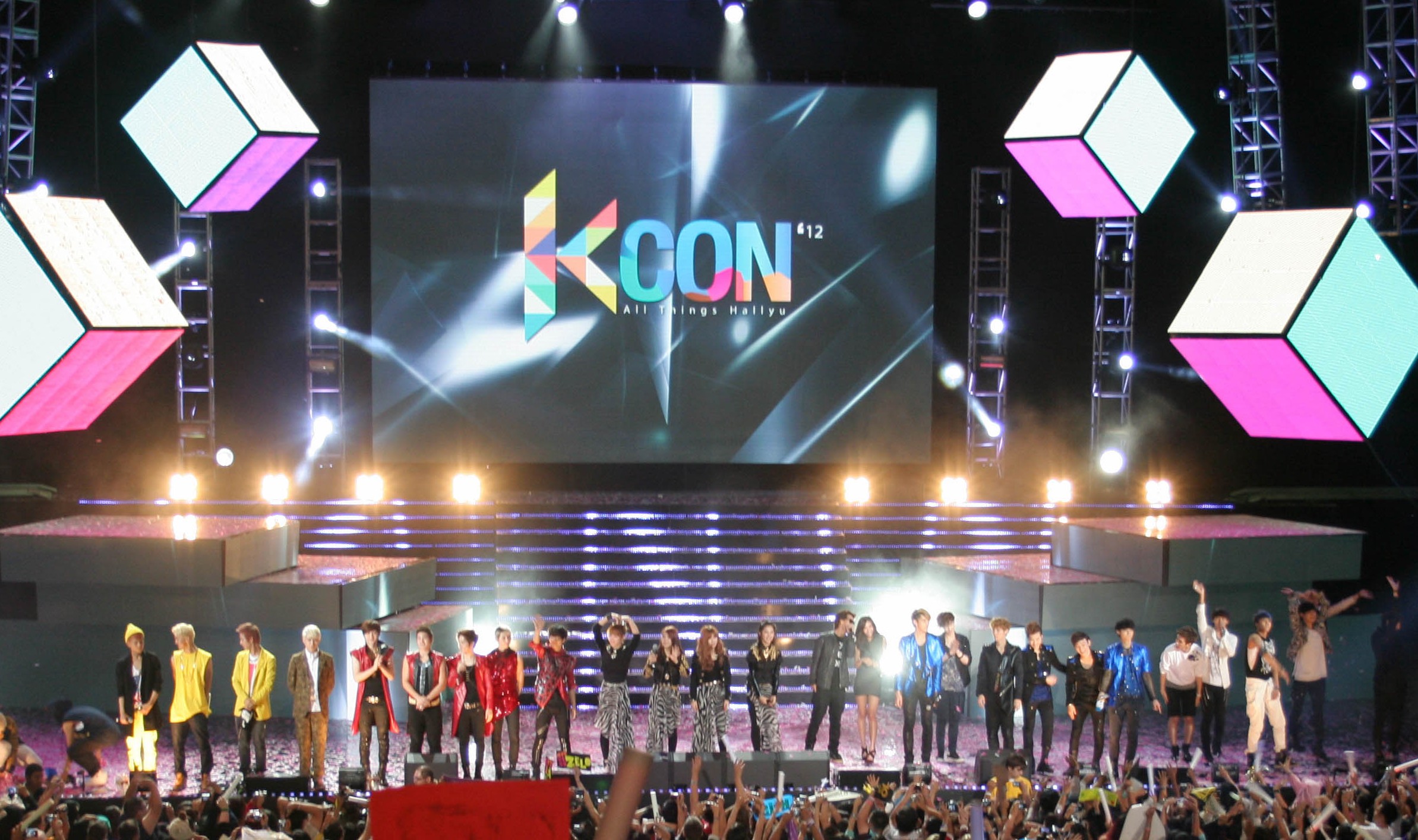 On Saturday, October 13th, the first ever large-scale K-Pop/K-Entertainment convention in the U.S. was held at the Verizon Amphitheatre in Irvine, CA, and Soompi was there!

A small team of Soompi staff and volunteers spent the day working at the Soompi booth. We gave away a total of twelve signed and unsigned CDs, six posters, and hundreds of Soompi pins and stickers throughout the day. Thank you to the volunteers who helped out at our booth! Also thanks to everyone who visited our booth to participate in the raffle or check out our TV playing K-Pop MVs!

Although I spent most of my time manning our booth, I tried to check out the rest of the event during my breaks and wanted to share my review of the event for those of you who weren’t able to attend.

Convention Venue
KCON was held at the Verizon Amphitheatre in Irvine, CA. There was a grassy park-like area next to the amphitheater where all of the convention events were held. Everything was held outdoors, with all the booths, panels, and autograph sessions happening in tents to help block out the sun.

The size the convention area was appropriate for the number of attractions and people that were present at the convention, if not a little bit too small, and the layout was easy to navigate. However, the weather was very hot all day, so an indoor venue should probably be considered for future KCONs. Although the tents for the panels and autograph sessions were large, the events were so popular that many people stood outside in the sun trying to catch a glimpse of the artists or listen to the panels.

It was awesome that so many international fans had the opportunity to get autographs from these popular artists in person. Even if you weren’t lucky enough to get an autograph, you could still hang out in the tent and see them during the signing and the Q&A session. Kudos to the fans who were well-behaved and respectful of each other, the artists, and the staff who kept things under control. While it was uncomfortably packed in the front half of the tents, the chance to see many idols up close was worth it.

The only criticism I have is that it wasn’t made clear before or during the event how fans could participate in the autograph sessions. Fans were supposed to line up 30 minutes prior to the signing to receive a voucher, but the procedure changed without much notice, to handing the vouchers out randomly. We’ll give them the benefit of the doubt that things had to be modified to account for the safety of the massive number of fans and artists.

Panels
There were a total of thirteen panels held throughout the day on a great array of K-entertainment topics with many great panelists and moderators, such as our very own Soomp. Just a few of the topics discussed: The Rise of Foreign Influence in K-Pop (pictured below), Making a Hit: Songwriters, YouTube Idols: Up Close & Personal, K-Pop Fashion, and The Secrets of Auditioning.

The panels were very popular and gave fans a rare opportunity to learn about interesting Korean entertainment-related topics from industry professionals in a relatively intimate setting. Unfortunately, some of the tents were too small for some of the more popular panels, so many people had to stand outside of the tent where it was hard to hear and see the panel.

Booths and Other Attractions
There were many different kinds of booths and activities at KCON. There were booths selling K-Pop merchandise and Korean cosmetics, fanclub tents, and sponsor tents (MNET, Koreaboo, Asiana Airlines, Verizon, and LG) that raffled away merchandise and other prizes, even roundtrip tickets to Korea. Other attractions included DJ Areas, a gaming tent, workshops, food trucks, Love Connection Speed Dating, a cosplay contest, performances, and a singing/dancing contest.

I loved the great variety of fun booths, contests, workshops, and other interactive attractions. For the next KCON, it would be great if a full list of booths/vendors were announced prior to the event so that fans can prepare for their favorite attractions.

Concert
The concert stage was awesome and had two screens on either side showing closeups of the artists performing. The stage also had a large screen in the middle that showed animations that fit with each performance, along with a large staircase and four giant suspended cubes that were also playing the animations. The amphitheatre also provided a nice view of the city.

The concert was my favorite part of the day! I thought all of the artists gave fantastic performances. The emcees, Danny Im (Taebin) and G.NA, did a great job, the stage was awesome, and the seating at the venue was spacious.

My recommendations to fans for the next KCON: Check out the list of attractions before the event and focus on the few that you really want to do instead of trying to do everything because there are simply too many things to do and space for most attractions is very limited. Merchandise also ran out very quickly, so make sure to preorder.

In summary, although the event had some logistical issues, which is understandable given this being the first all-day K-Pop event at this scale, KCON was a wonderful place to connect K-Pop fans with each other and with the artists. Everyone worked so hard to make KCON as good as it was, and I’m so happy that it happened. They also offered this experience at a very affordable price compared to other K-Pop concerts. I hope that KCON definitely becomes an annual event!

Check out MNET’s official recap video of the event:

Thanks to KCON for allowing Soompi to be a part of this landmark event! Watch out for our review of the concert, as well as our photos from the event.