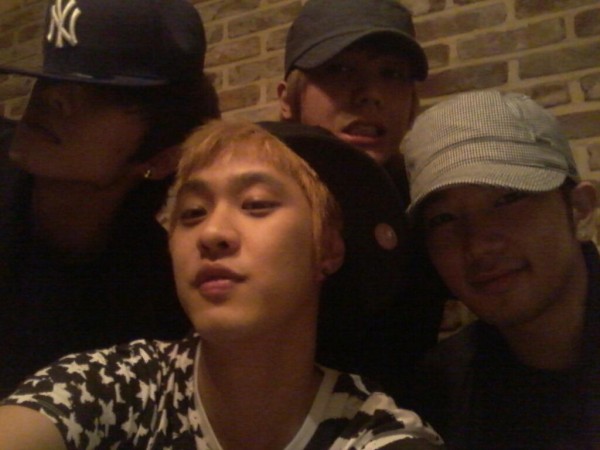 It was another fun week with celebrities capturing moments of everyday life and sharing them on social media!

Jay Park had a chance to meet his long time basketball hero, while 2NE1’s Park Bom introduced her cellist/movie star sister! Also, make sure you check out G-Dragon and Taeyang’s definition of “swag,” and Jang Geun Suk’s surprise “couple ring”!

(Scroll through the list by clicking the arrow at the bottom of the top image!)

“Jungle jungle jungle unknown lands!!!” – Rainbow’s Jaekyung holds up a book about Papau New Guinea, the filming site for the next season of SBS “Laws of the Jungle.”

“It’s been a year since I joined ‘Radio Star.’” – Super Junior’s Kyuhyun celebrates his one year anniversary as the co-host of MBC “Radio Star.”

“Huh? Oh, right, I made everyone come over and now we’re working on a song together.” – FT Island’s Lee Hongki hints at a new song via Twitter!

“Swag kkkkkk” – G-Dragon shows what real “swag” is with Taeyang!

“Yoo Hee Yeol’s Sketchbook! Please look forward to it on the 19th at 12:20AM ^^” – 2NE1’s Minzy takes a selca while getting makeup backstage!

“My face is bare (no makeup), so I’ll just show my eyes.” – Kara’s Nicole shares a “no makeup” selca on Twitter, as she shows off a surprise fan gift from a Japanese fan!

“Hehe, just wanted to share my happiness with all of you~~~<3^^” – f(x)’s Victoria snaps a photo while on vacation!

“My sister is a cellist!!!! My sister was at the Busan International Film Festival kekeke. Apparently, she filmed a movie without telling me~~*^___^* I’m such an ignorant younger sister T.T…. The movie is titled ‘Ensemble’” – 2NE1’s Park Bom introduces her cellist/movie star sister, Park Go Eun!

“I got couple rings!!……with my mom…..” – Jang Geun Suk throws a shocker at fans with this playful tweet!

“Kkyaa~ we’ve received your gifts at the ‘Inkigayo’ waiting room ^___^ The gifts are full of your love~~!!” – Secret thanks the fans for all the gifts they got at “Inkigayo”!

“Had a great time with @RealHughJackman #GangnamStyleWolverine~!!! lol” – Psy meets up with Hugh Jackman, the man behind the Wolverine character!

“These photos are the oldest hehe. We were really hyped and took a lot of photos in New York.” – f(x)’s Krystal shares old photos with Luna, holding a Red Bull drink!

“Bebop class. Latin class. Jazz choir. Difficult and very hard T.T. The weather is so good…heading to the cafeteria for some food. Go go~” – 2AM’s Jo Kwon gives fans a look at his daily school life!