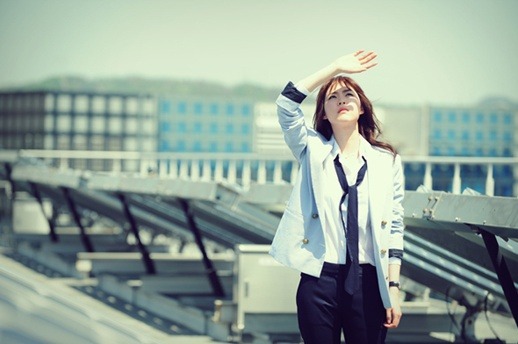 Lee Yeon Hee flaunted her unique elegance and innocent-looking smile throughout the filming. Lee Yeon Hee kept running back to the monitor to see how she had done, but seemed rather unimpressed. She murmured, “I don’t know if I’m expressing this right,” and continued to rehearse by herself during breaks and free times. Before returning to filming, one of the staff members asked Lee Yeon Hee, “Are you confident?” and she shyly responded “I practiced a little bit at home, but I’m not sure if it’s all gonna come out or not,” with a smile on her face.

Upon returning back on the set, Lee Yeon Hee tried her best to express refreshing feelings with her facial expressions and body movements. However, it all seemed not enough in the eyes of the director. The director stopped filming and told Lee Yeon Hee, “That’s not classy.” She responded to such comment with a smile, but she still seemed a bit embarrassed.

Netizens commented on this video, “She must be upset, but she really needs to put more efforts in,” and “If staffs and the director are openly criticizing your acting, there must be a problem.” Meanwhile, some fans are defending Lee Yeon Hee, “That was so unnecessary,” and “She’s trying her best. Don’t scold her like that.” Other netizens blamed “Wide Entertainment News” for poor editing of the scene, claiming that “It was just another happening on the filming set, they just wanted to make it look like it’s a bigger deal than it really is by editing it poorly.”

Lee Yeon Hee
Wide Entertainment News
How does this article make you feel?