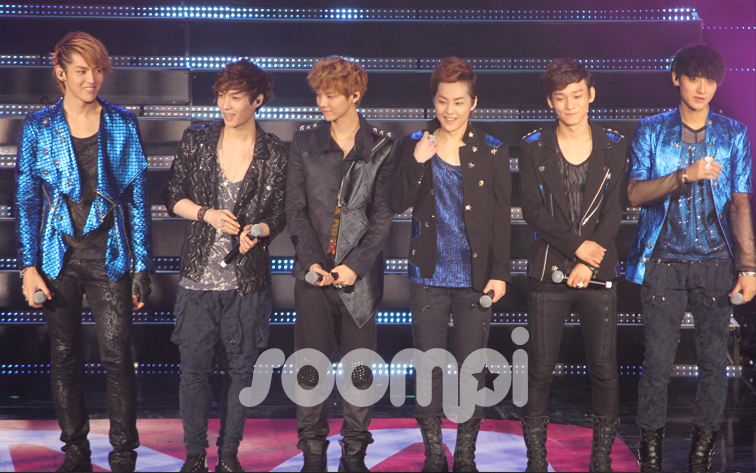 October 13th marked the date for the first large-scale K-Pop convention KCON produced by MNET, and this unforgettable day could not end without a concert boasting a star-studded lineup including EXO-M, B.A.P, NU’EST, 4MINUTE, G.NA, and VIXX! If you haven’t already, be sure to also check out our coverage of the event itself!

Although the concert itself was scheduled for only two short hours, fans were nevertheless treated to a memorable show. Right from the start, strong opening performances from AJ Raphael, Dumbfoundead, Daze47 and BWB filled the atmosphere with excitement for the main acts. Appearing with only simplistic set arrangements, AJ Raphael moved the audience with his power vocals and touching lyrics. Dumbfoundead, along with Daze47 and BWB, riled the crowd up with their energetic rap and dance.

The lights dimmed, prompting more screaming from the fans. Suddenly, a “boom clap, boom boom clap” rang through the amphitheatre, and a perfectly yellow-color coordinated B.A.P rose from moving platforms above the stage, opening the main stages of the night with “No Mercy.” As they slowly made their way down from the stairs, members Bang Yong Guk and Zelo completed the rap parts, almost face-off style; the group comes alive, jumping straight into the choreography, not missing one beat.

After a quick introduction, the boys slowed down the pace in the next song and won over the audience’s hearts with ballad “What My Heart Tells Me to Do.” The fans in the audience became unusually silent, entirely mesmerized by the soothing melody; in particular, member Daehyun’s power vocals became the highlight of the song. Soon, the lights dimmed once again, and B.A.P arranged themselves into formation for their last song of the night, “Crash,” not forgetting to embed plenty of fanservice and cutesy poses into their performance. MC Danny (from 1TYM) emerges on stage, signaling the nearing of the end of B.A.P’s appearance. The members said a formal goodbye to the crowd, mentioning that they had a great time performing for the first time in the United States.

Next up was native English speaker G.NA, who was also doubling as the other MC for the night. After appearing on stage with a solo spotlight and a sexy pose, G.NA was soon joined by backup dancers as she launched into a perfectly synchronized version of “2Hot,” made complete with the song’s iconic hair flips. She continued with an English version of “I’ll Back Off So You Can Live Better,” changing the focus of her performance from dance to vocal, and was spot-on, even through the high notes. During a brief break, G.NA thanked the audience for being supportive of K-Pop, claiming that the fans “are the reason why [they’re] on the stage [right now].” With no delays, G.NA finished off her performances of the night with “Black and White,” but promised to be back in order to continue emceeing the show.

G.NA gets into formation for her last song “Black and White.”

A 8-bit retro game sound opening greeted the audience, and VIXX appeared center stage to perform their newest single “Rock Ur Body.” After the introduction song, leader N cutely produced a ROVIX logo-ed notecard from his pocket, and then proceeded to read out the English speech he had written for the crowd, pausing occasionally to give the fans thumbs ups and hearts, thanking the fans for being at KCON. This was VIXX’s second time performing on an US stage; the boys made an appearance as a special guest to anime convention Otakon earlier in the year.

Soon after, VIXX melted the hearts of the fans in the audience with “UUUU,” injecting the song with plenty of fanservice, though notoriously shy member Leo looked a bit embarrassed for doing it. A remix version of their debut single “Super Hero” blasted through the speakers, and VIXX fittingly ended their performances of the night with the lyrics “I feel, I feel fantastic.”

VIXX slows down the pace with “UUUU.”

(From left to right): Members Ravi, N, Hongbin, and Ken perfectly in step.

The lights dimmed once again, and the spotlights on stage slowly swung to reveal five seated NU’EST members. With no delay, the members, dressed in matching fiery red outfits, launched into their debut single “Face,” complete with the famous chair choreography and dubstep dance break. During the introductions, member and native English speaker Aron took center stage, and shared that he’s amazed “how much an influence K-Pop has become around the world.” He then prompted the other members to speak English, and the members shyly and hesitantly responded back, in English, with “I love you”s and “Nice to meet you”s.

NU’EST member Aron speaking on behalf of the group, thanking fans for their support.

Unsurprisingly, NU’EST continued the trend of singing a slower-paced second song, and the boys, to the delight of the fans, tenderly performed “Not Over You.” However, the fierce charisma of the group was brought back with the performance of their newest single “Action,” bringing about a perfect closure to their time at KCON.

(From left to right): Members Ren, Baekho and Aron during NU’EST’s performances.

NU’EST nervously anticipating the beginning of their last song.

The next group warranted the most screams from the fans in the audience; EXO-M, appearing first with their backs to the audience, energetically and flawlessly performed “History,” and without a pause, launched straight into their second song “Into Your World.” Leader and resident English speaker Kris led the group’s introductions, rousing up the crowd with his fluent English and even offering to move up closer on the stage so that fans can get a closer look to their favorite idols.

EXO-M introducing themselves to the audience.

Soon after, the other members retreated backstage to make way for Luhan and Chen‘s performance of “What Is Love”; their power vocals echoed through the venue, blending together in perfect harmony. Another break followed, and emcees Danny and G.NA joined EXO-M on stage for a brief Q&A session, in which Kris was somewhat forced, even after multiple attempts at stalling, into showing his aegyo (he asked the audience whether we could keep it a secret – we can’t!). Of course, the night could not end without EXO-M’s long awaited performance of “MAMA”; from the iconic violin riffs and chanting to the perfectly synchronized choreography, “MAMA” was definitely one of the standout performances of the night.

(From left to right): Luhan belts out a high note, Tao showing us his aegyo, Xiumin screaming out the lyrics.

EXO-M concluding their performances for the night with a cool ending pose.

It was time for the last remaining group to perform. 4Minute, rising up out of the movable platforms, wasted no time as they delivered a great live version of their most recent single “Volume Up.” Although the group was missing Gayoon, who was sick, the girls performed their best in order to cover up for the missing vocal, proving themselves to be true veterans in the industry.

Without much of an introduction, the girls proceeded directly into “Mirror Mirror,” “HuH” and “Heart to Heart,” all of the dances exemplified with the flowy black and white skirts that they wore. The end of the concert was fast approaching; there was only one more song left to perform. 4Minute, riling up the crowds’ energy by saving their most recognized song for last, asked the audience to sing along, and immediately, launched into “Hot Issue.”

The artists reluctantly say goodbye to the fans.

But soon, the final note of the final song sounded, and with that, KCON 2012 came to an official end. The artists emerged back on stage to give a final curtain call, and still-excited fans slowly began to file out of the venue, reminiscing about the day’s events. If you haven’t already, be sure to check out Soompi’s coverage of the convention itself and our photo album of the event. We’ll see you guys at KCON 2013!