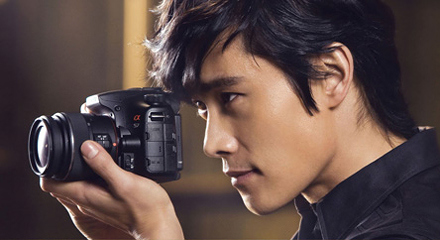 Actor Lee Byung Hun is riding his 2nd wave of popularity with his latest movie “Gwang Hae,” which has been reported to attract 10 million viewers since it came out in theaters on September 13. Which means, it’s the 2nd movie in Korea this year that have made such an achievement. And with such newfound interest from the public, comes a little price- a little digging into the past, about 20 years.

An online community forum has recently posted pictures of the man titled “Hallyu Star Lee Byung Hun at a Luxury Birthday Party.” It’s been revealed that the fans prepared a birthday party for the star.

This particular event took place in the early mid 90s when Lee Byung Hun was just starting to rise in popularity. The pictures show him looking innocent and young in his 20s, reminding his newer fans that he had such a past. He showed off his presents such as t-shirts, CDs and cookies to the camera proving his love for his dedicated fans.

It’s such a contrast to the present where recently, he held a birthday party with his fans in Japan and more than 10,000 people attended the event.

Soompiers, it’s amazing how he has already dedicated 20 years to the industry. Did you know he and Jang Geun Suk worked for almost the same amount of time? Jang Geun Suk has started working as a model at the young age of 6.