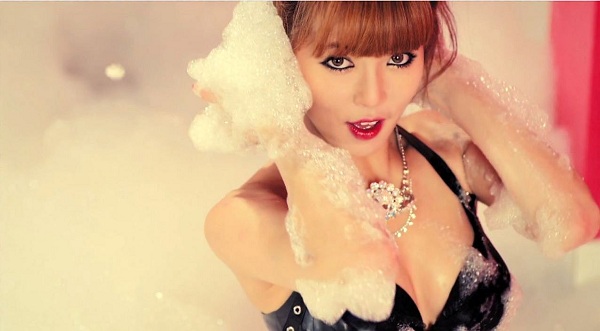 On October 22, 4minute’s HyunA returned with her new music video “Ice Cream,” the title track for her second solo album, “MELTING.” As it’s always the case with HyunA, the MV features a good dose of her sexiness, cuteness, and teasing – and we absolutely love it! Honestly, we’re just glad that she’s back to the K-Pop music scene, but I got to say, she hit another home run with this music video!

To celebrate HyunA’s comeback, we’ve decided to put together 5 of her hottest music videos. It goes without saying that HyunA is by far one of the sexiest solo acts in today’s K-Pop, but we almost forgot how hot she was in her other music videos! We had a great time putting together this article – and we hope that you enjoy the list as well!

Scroll through the list and please let us know which MV is your favorite!

In this spin off of “Gangnam Style,” HyunA points at Psy and calls him, “Oppa is just my style!” Her pronunciation of the repeating “Oppa is just my style” verse was a bit awkward, but nonetheless, she looks hotter than ever, which explains why this video brought in over 100 million views, passing Girls’ Generation’s “Gee” for the second most viewed K-Pop video all time (PSY’s “Gangnam Style” ranks #1).

This 2011 music video by Troublemaker, a unit duo formed in partnership with BEAST’s Hyunseung, made headlines even prior to its release, because of its provocative title and teasers. The music video itself features a lot of steamy moments and the live stages were even hotter – they were forced to change their choreography as it was flagged inappropriate to minors.

We’ll have to wait and see how the fans respond to this video, but so far, we think it’s one of her best MVs. Although it doesn’t come with anything that particularly stands out, we love the refined choreography and high definition quality. My personal favorite moment: her bubble bath while wearing a leather tanktop.

This is HyunA’s first solo track, released in 2010. It really put HyunA on the map with her provocative yet unbelievably sophisticated dance moves. The music video is full of action and amazing moves – the “hip dance” in this video was picked one of the most popular and controversial dances of the year. Of course, it was flagged unsuitable to minors.

This 2011 electro pop track has given us a new perspective on HyunA – we knew she could rap and dance, but didn’t know she could pull off these “sweet” pop dance tracks as well. Prior to “Oppa Is Just My Style,” “Bubble Pop” was the most viewed HyunA MV, attracting over 37 million clicks on YouTube. The “hip dance” in this music video was also ruled unsuitable to minors, but you know what – we absolutely love her movement in this video and hope to see more of a “Bubble Pop” from HyunA!