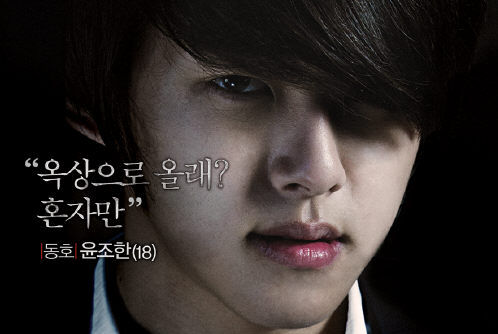 U-KISS member Dong Ho transformed into a dark sexual offender for the poster of the new movie, “Don’t Cry Mommy.” The movie, about the realities and motives of young sexual offenders, received rave reviews at its premier at the Pusan International Film Festival.

In the poster, Dong Ho has a cold and unreadable expression with one eye hidden, making the poster as dark and intriguing as the movie itself.

For the photo shoot of the poster Dong Ho showed professionalism and an acute understanding of what was expected of him by creating the right intense look. His immediate immersion into the character’s image brought upon applause from the staff members.

Dong Ho took on the challenge of playing a two-faced villain for the movie; a completely different image than the one he has as an KPop Idol. He and drama actress Nam Bo Ra play delinquent high school students who try to get out of taking the responsibility for the bad situations they create for themselves.

The movie is expected to shake up the Korean movie industry as it reveals the truth about the lack of laws in South Korea regarding minors who commit sexual crimes.

The movie featuring Dong Ho, Nam Bo Ra, and Yoo Oh Sung is expected to be released next month.

Dong Ho is also currently busy promoting U-KISS 7th mini album, “STOP GIRL”, and at the end of the month will be doing a South American tour. Following that, U-KISS is scheduled to release a Japanese single album next month.