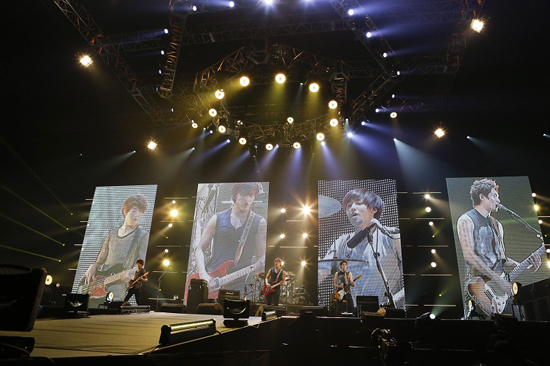 CNBlue Brings in over 100K Fans to Japanese Arena Tour

CNBlue successfully wrapped up their first Japanese Arena Tour, “Arena Tour 2012~Come On~,” bringing in over a total of 100,000 fans to nine concerts across six different cities.

The Arena Tour, which began on October 2, ran for nearly 20 days, until its finale concert on October 21 at the Saitama Super Arena, which lasted for over three hours. At the final concert, the group’s leader Yonghwa said, “We are absolutely stunned by the crowd at Saitama. We’re thankful to have so many people show up at this concert.”

He added, “We’ve done a lot of individual promotions lately, but we’re the happiest when all four of us perform live together. We’ll continue to return the love through great live performances.”

CNBlue performed 26 of their most popular songs, ranging from “Time Is Over” and “Have a Good Night” to “These Days” and their Japanese single “In My Head.”

CNBLUE
KPLG
Yonghwa
arena tour
arena tour 2012 come on
time is over
have a good night
these days
in my head
How does this article make you feel?