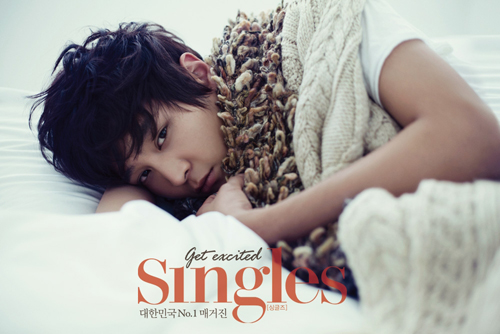 Joo Won on Singles: “I Like Nice, Bear-Like Women”

Joo Won recently participated in a photo shoot and interview with fashion magazine Singles‘ November issue. During the photo shoot, Joo Won looked natural and down to earth as if he really was home, lounging and relaxing. He matched a comfortable looking t-shirt with knitted cardigan. He gently looked into the camera from the bed as if he had just woken up from sleep, looking like a prince charming from a romance movie.

During the interview that was conducted along with the photo shoot, Joo Won referred to himself as “love-starved.” When asked about his secrets to being highly successful in TV drama, musical theatre, and movies, Joo Won responded, “I just don’t try to stand out by myself. I always want to be seen as my character is supposed to be in a certain piece.”

Singles also asked Joo Won about his ideal type of woman. He picked “a bear-like nice woman” as his ideal type. He explained, “I just want someone who I feel comfortable and content when I’m with her. I don’t want to be all nervous and antsy with her even after getting married. Rather than playing games, I prefer being honest to each other.”

More pictures and detailed interview will be available in Singles’ November issue.

Joo Won
Singles
How does this article make you feel?