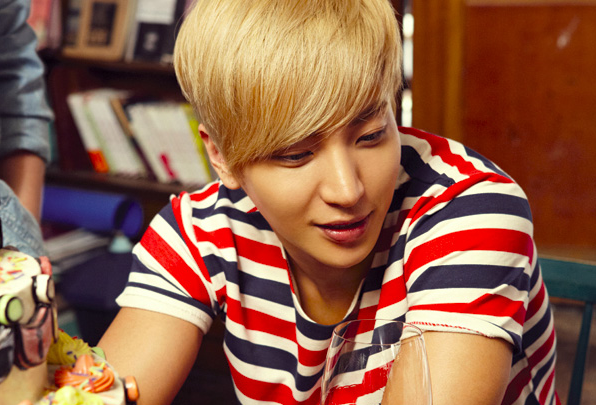 All Korean men are required to serve the military for 21 months, unless you have serious health issues. It’s no exception for celebrities too and we’ve seen a number of top stars leave their job to serve the country over the past few years. Just last year, for example, we’ve seen Rain, Super Junior’s Heechul, Wheesung, Hwan Hee, SS501’s Kim Kyu Jong, and Ji Hyun Woo enlist to fulfill their military duty.

This month, however, seems like a particularly busy month for Korean celebrities to join the military. A total of 7 top stars are (or already have) enlisting by the end of this month – and it’s absolutely heart breaking to see them leave us for the next 21 months! Here’s the full list – please let us know if we missed anyone!

8eight’s Lee Hyun joined the Korean army on October 8. He’s currently at the Non San boot camp training facility. At 28 years old, Lee Hyun is older than the average age that people usually enlist in Korea, but his latest photo shows he’s doing a good job getting used to his new army life.

The 29-year old actor Kim Mu Yeol, who’s also the boy friend of Yoon Seung Ah, has enlisted on October 9. Although he was granted military exemption for being a “low-income individual” in 2010, Kim Mu Yeol was under intense public criticism for intentionally dodging the military service. In order to avoid any further criticism or misunderstandings, the actor who rose to stardom through 2012 film “A Muse” has decided to just finish his military service this year.

The star actor from “Architecture 101,” Lee Jae Hoon will enlist on October 25 and serve in the Korean Police Department’s PR office. Lee Jae Hoon has been super busy this year with movies “Architecture 101” and “Ghost Sweepers,” as well as the SBS drama “Fashion King.” He also has two more movies coming up, “Ethics of Anger” and “I Am Paparoti,” so at least we’ll be able to see him even after he enlists this month!

TRAX’s Jung Mo is also scheduled to enlist on the same day as Lee Jae Hoon on October 25. Upon completion of the basic boot camp training session, Jung Mo will finish his military service as public personnel officer. On October 22, after recording his final radio show, Jung Mo broke down and said, “I won’t forget every one of you.”

Leeteuk, the leader of Super Junior, is joining the Korean army on October 30. Despite suffering from back injuries due to a car accident, Leeteuk will be serving as a regular military officer. On October 23, he wrote on his Twitter, “D-7 I’ll try to make the happiest one week in the world.”

Mighty Mouth’s rapper Sangchu is also joining the army on October 30. Just like Leeteuk, Sangchu suffered a shoulder injury in the past and is eligible to serve as public personnel officer, but he wanted to serve as a regular military officer instead. After 3 health examinations to prove he can serve the regular army, he was finally granted the green light and will go through the Non San training session before joining one of the artilleries.

Ryu Sang Wook, the actor who rose to stardom through Brown Eyes’ 2008 single, “Don’t Go, Don’t Go,” is the third celebrity to enlist on October 30. He’s solidified his position as a good actor through the dramas “Queen Sunduk” and “Cinderella Man.” Unlike other stars, he will enlist through the Choon Chun training camp.